We need a broad and balanced assessment system too

As a psychology A-level teacher, one of my favourite teaching topics was the fallibility of witness testimony. A classic study, devised by Loftus and Palmer in 1974, had 45 students watch films of different traffic accidents and answer questions about it afterwards. The psychologists discovered that the way a question was phrased changed the answers. If participants were asked to guess how fast the cars were going when they “hit” they gave a lower speed than when asked about their speed when they “smashed” or “collided”.

Not only can we be manipulated, but our memories also rapidly fade. If I ask what you had for dinner last night, you can probably remember (go on, think harder). But if I asked what you had on the same day last week, it probably will be more difficult to remember, given that so many other meals have been eaten since then. Psychologists call this “interference” and it happens when trying to ask people about phenomenan that happen over and over again.

One thing is for certain – term times are a long slog

Teachers are not immune to this problem. The daily routine of the classroom is, on the one hand, reasonably monotonous. Playground line-ups, registers, writing the date on the board; many aspects of the school day are repetitive, even if they are interspersed with the zanier moments of Jamil wearing socks on his head or Ava showing off her latest Little Mix interpretative dance. Having teachers think back and remember what they did over a long period is therefore at risk of interference because it’s hard to keep track of precisely which thing happened at any given time.

At Teacher Tapp we were particularly interested in this phenomenon because we’re trying to quantify teacher workload, but we have no idea how accurately teachers can recollect the amount of hours they have worked. We therefore created a test. For seven days, including the weekend, we asked teachers “how many hours in total did you work yesterday?” Then we waited a day, before asking “how many hours do you think you worked last week?” In total, 854 teachers who work full-time answered all of the questions. How did they do?

On the daily logs, the average reported hours were 53.5 hours.

On the weekly logs, the average reported hours were 56.1 hours.

Why the difference? Well, most teachers are reasonably accurate when looking back over a week. Four out of five estimated a weekly figure in roughly the same ball park as their daily scores added together. But one in five were some way off when estimating their weekly versus daily responses, and almost all over-estimated their hours across the week, compared with what they had reported on a daily basis. 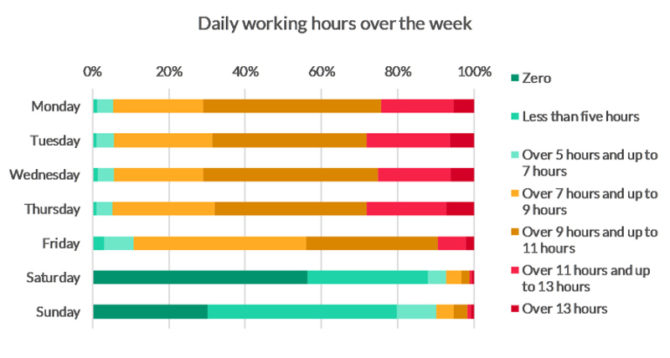 Is this because teachers are trying to make themselves seem busier than they are? We think there’s a simpler reason. Unlike most professionals, the hours teachers are told they must work in a classroom amounts to only about half their total working hours. And, unlike in other professions, there is no concept of overtime, so they don’t have to log their additional hours.

Work therefore leaks into “personal” time. For example, should we count lunch hours in teacher working hours? If you’re sitting in the staffroom having a snooze, then probably not. But if you’re on lunch duty, running an extra-curricular club, or setting up your room for an afternoon activity, then it’s probably right to keep them in.

What about the fact that on any given night about 40 per cent of teachers tell us they are marking exercise books in front of the television? Does that count as work time? (And does all of it count? Even the bit when you put down your pen to gawp at Winterwatch).

No matter how we ask, getting an accurate view of teacher workload is going to be difficult, but one thing is for certain – at even 53 hours a week, term times are a long slog.