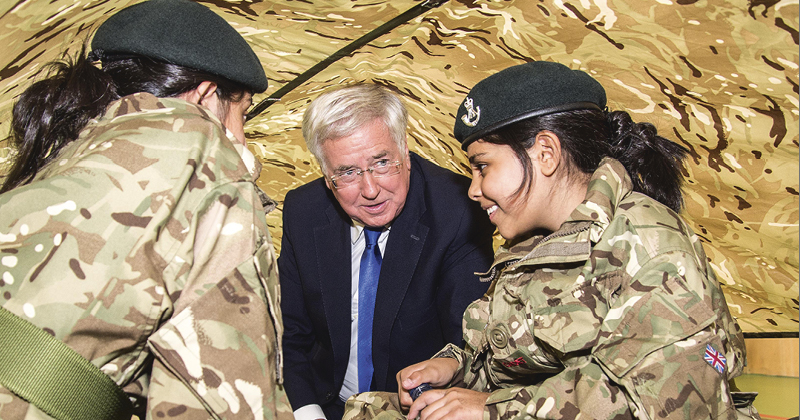 Figures obtained under a freedom of information (FOI) request reveal 129 state schools in England run the after-school cadet clubs, up five from the 124 recorded in 2015. The total is an aggregate so more could have opened, but some would also have shut over the year.

In his summer budget last year Osborne announced a £50 million pot, raised through fines levied on banks, to create cadet forces in 500 state schools by 2020.

But the new figures suggest the government will struggle to meet its Cadet Expansion Programme (CEP) target, with about 100 cadet forces needed to be set up in state schools each year.

Critics of the scheme have said the slow uptake proved a lack of demand for the government’s “military ethos” in schools.

Emma Sangster, a coordinator for campaign group ForcesWatch, which scrutinises Army recruitment policies, said money pledged as part of the scheme should not be ring-fenced for the CEP, but made available for other extracurricular activities.

However Michael Fallon, secretary of state for defence, announced at the Conservative party conference this week that 25 new schools have been approved to open units over the next 12 months.

On Tuesday he visited Rockwood academy in Birmingham, one of the schools that opened a unit this September.

The school, previously named Park View, was at the centre of the Trojan Horse scandal over allegations that Muslim hardliners were trying to take over.

Fallon said: “These new school units will help young people to get on in life, raising their aspirations and motivating them to succeed in their education. With the schools approved today focused in areas of high deprivation, this is part of our plan to build a country that works for everyone.”

More than 40 pupils have signed up to the new cadet unit at Rockwood.

Gary Newbrook, a contingent commander with the Combined Cadet Force [CCF] who is now based permanently at Rockwood, added: “The CCF is designed to instil values in young people that will help them get the most out of their lives, and to contribute to their communities and country.

“This means students developing qualities such as self-discipline, loyalty and respect, strong leadership, teamwork and resilience.”

But Sangster said the figures obtained by Schools Week showed there “isn’t the demand the government is suggesting there is”.

The FOI request also revealed the total number of cadet units in state schools has increased by just 69 since 2012 – when David Cameron announced an earlier £10 million scheme to boost numbers.

Sangster added: “As a parent, I’d also be concerned about how the presence of someone in a military uniform at the school affected the environment.
“Often there are people in the community that come from all kinds of backgrounds, like refugees. Such visibility is worrying.”

The Ministry of Defence said the government was on track to meet its target. It previously said “some months” were needed to process and approve applications and then set up the units.

A spokesperson added: “The rich leadership and development opportunities offered in the cadets, which are quite separate from recruitment into the armed forces, speak for themselves.”