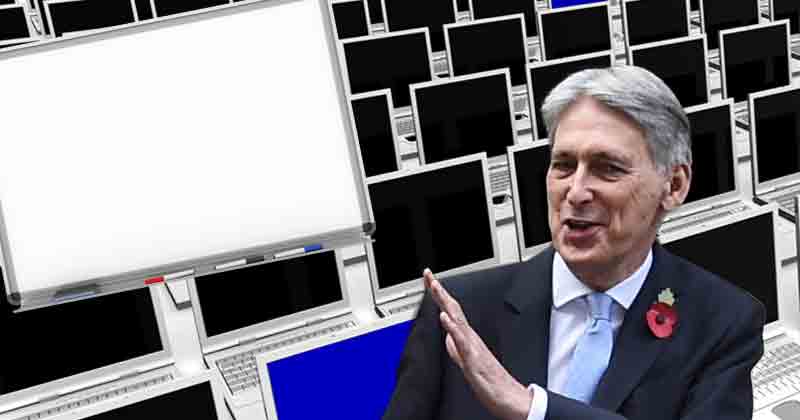 Philip Hammond has defended his pledge of funding for “little extras” for schools, and said it would be “useful” to pay for “whiteboards and laptop computers”.

Speaking on the Today Programme, the chancellor said his announcement of a £400 million in year capital “bonus” for schools in yesterday’s budget was “quite different” from the government’s long-term plan for school revenue funding, which won’t be set out until next year’s spending review.

Hammond has been widely mocked for his comments after announcing in parliament that the money would “help our schools buy the little extras they need”. The saying has even sparked the use of a hashtag, #littleextras, with teachers tweeting their ridiculous suggestions for what the money could be used for.

For example, if a school needs to buy a couple of whiteboards, or some laptop computers or something like that, having a cheque for £50,000, I would have thought, would be quite useful for most schools

John McDonnell, the shadow chancellor, said people had been “really angered” by the remark, while shadow education secretary Angela Rayner branded it “utterly insulting”. At the same time, headteachers’ unions have criticised the government for failing to reverse real-terms cuts of £2.8 billion made since 2015.

This morning, Today programme presenter Nick Robinson tackled the chancellor this morning over his comments, which he said had “offended” some teachers. But the chancellor defended his words, and said the broader question of school funding was for another time.

“Of course we will be looking at schools funding again in the spending review alongside police funding, local government funding, defence funding, social care and all the many other things that we have to take care of,” he said.

“For example, if a school needs to buy a couple of whiteboards, or some laptop computers or something like that, having a cheque for £50,000, I would have thought, would be quite useful for most schools, and certainly for schools I talk to.”

He also dismissed the argument that the money would be better spent on teachers.

“You know as well as I do that when you hire a teacher you have to pay them every year, year after year after year, and to do that, you need a properly constructed spending settlement, which we will do in the spending review. What this is is a one-off payment.”

The chancellor also defended the pledge during a heated interview with ITV’s Good Morning Britain, in which he rejected claims that schools can’t buy essentials and said schools would be “happy” to receive the extra cash.