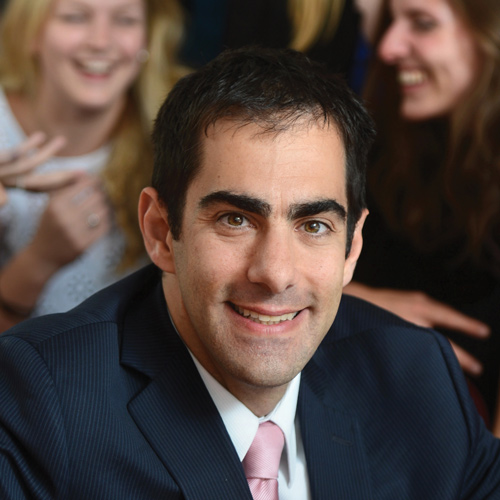 “I have never known what is weird and what is not,” says Brett Wigdortz, the man who founded teacher training programme Teach First 15 years ago and, as its chief executive, oversaw its meteoric rise before stepping aside this summer.

But his self-confessed lack of awareness means he’s never been put off as an overenthusiastic cheerleader. Besides, he simply doesn’t accept that missions to overcome social inequality are somehow “un-British”.

“Go to the William Wilberforce Museum, and you can see a very British movement in the 19th century that helped Britain become one of the first countries to end the slave trade,” he enthuses. “Or, you know, there’s the anti-apartheid movement from 30 years ago that was quite powerful in England. And, you know, no-one is smoking indoors in Britain today, and that’s not just a magical thing; that happened because a whole movement of health professionals worked together to ensure that second-hand smoke wouldn’t damage people’s lungs and hearts anymore.”

Sometimes I think about the film Sliding Doors, and somewhere out there a version of me finished up working in Jakarta

Wigdortz was in his late twenties, organising a start-up bank he had created for the lower-middle classes in Jarkata, when his bosses at McKinsey suggested he spend a year in London in order to improve his knowledge of financial markets. Arriving in the capital, he found financial projects thin on the ground and was instead put on a project looking at how businesses could help schools in London which, at that time, were struggling with recruitment and poor academic outcomes.

“I said, ‘oh great, my family are all teachers,’ and I was really interested. That was a life-changing moment, basically,” he recalls. “A very coincidental one. Sometimes I think about the film Sliding Doors, and somewhere out there a version of me finished up working in Jakarta and then went on to banking in Singapore.”

Two years later, Teach First took its first cohort of graduates into classrooms and never looked back. That first group involved 186 graduates; this month over 1,400 trainees started in classrooms.

Wigdortz says he always dreamed the programme would be “big” but kept it quiet. “I never said ‘we’ll definitely get 3,000 people’ because people would have thought I was even madder and crazier than I already thought I was,” he says.

Fifteen years on, it is easy to forget the barriers the programme faced in its first few years. Teach Firsters were shunned in staffrooms by staff angry that “unqualified” teachers were allowed their own classes. Newspapers wrote angry columns. The name particularly irked, as the phrase “teach first, do something else later” became a common refrain from teachers angry that the marketing suggested participants should go on to work in private business in the future. Yet Wigdortz was undeterred. He wanted the first cohort to be around the 200 mark and for it to grow each year. He pushed to get the programme into primary schools, and into Wales. He has worked on the Teach For All board that has put a version of the programme into 45 countries across the world.

What are the lessons he learned during this growth?

“Don’t worry about the valleys of death, because there’s always a hill of happiness around the corner,” he says gleefully.

Anyone who has ever watched Wigdortz speak on stage will have heard this phrase before. He regularly uses it to motivate newbie teachers through their first year.

He has also faced some hairy situations himself When setting up Teach First, the organisation needed a university to train its teachers. They put out a tender, but no-one bid. Oone organisation put in a half-bid but only for 50 teachers and only if they could do the training via video.

I’m always going to have a relationship with Teach First

Wigdortz turned to Sonia Blandford, a leading education academic, in the January before trainees were due to start in June. Through “entrepreneurial spirit” and a lot of negotiation, Canterbury Christ Church University agreed to step in and take the graduates. The whole programme had to be designed in just five months.

“It was a pretty good programme actually,” Wigdortz says. “Not as great as it is now, but I think we did a pretty good job in that first summer.”

For nine years Dame Julia Cleveden chaired the organisation and helped him to see the importance of looking out for his staff. “She would ask why a person was looking stressed and if had I spoken to them,” he says. “If a person was ill she would ask if I had sent flowers. Beforehand I wouldn’t naturally have thought of that; I was a strategy consultant, and I saw people simply as a way of implementing a strategy.”

In his autobiography, he has also written of his overly optimistic  decision not to recruit a finance director in the first year, but instead to hire a “head of alumni”.

“If I had to do that over, I would have raised more money and hired both early on,” he admits.

Challenging Wigdortz on any of TeachFirst’s issues is a disappointing strategy. He recognises “valid criticism” over the academic side of programme – that’s why it now offers a postgraduate diploma (an extended PGCE). On its expensiveness, he points out that heads are repeat customers and many credit trainees for helping improve their schools. He spins every critique to a positive. So why leave when he’s so enthusiastic and optimistic about its future?

“The first thing to say is, for my whole life, I’m always going to have a relationship with Teach First and I’m really excited to be honorary president and the founder,” he says, in a tone far less creepy than it sounds on paper. “I say this to ambassadors – you never get to leave this movement!”

Second, he explains how his great uncle went to law school in his sixties: “He graduated at 63, and practised law for 20 years into his eighties. He helped homeless people and asylum seekers. I learned from that the importance of always learning through life, and being open to doing things very differently, not just sitting on your laurels basing things on your past success.”

So what will he do now?

“I don’t exactly have a plan,” he admits. “I really want to focus on something that can make disruptive, transformational change.”

Parenthood has focused him on early years and what can be done to help children get ready for school. He also worries about childhood obesity, employability, social mobility, and vocational training. If those sectors aren’t ready for disruptive transformation, history suggests that minor inconvenience isn’t going to stop him from having a go anyway.

In the meantime, however, he says one of his biggest points of pride are the spin-off Teach First programmes in other sectors: Frontline in social work, Unlocked in prisons and Police Now all operate on a model aped from his first programme.

“That’s the dream. I mean it. It’s amazing. They are having such a positive effect on so many people. Doing so much good. It is brilliant to know we had anything to do with that,” he says.

It used to be Catcher in the Rye until I got older and realised what a jerk Holden Caulfield is. Recently read “Stranger than we can imagine: making sense of the 20th Century” and found it really insightful.

If you could have a superpower what would it be?

I would love the ability to time travel and see what things were really like in the past and possibilities in the future.

Describe a party you went to as a child

I grew up in the Jersey Shore and remember a beach party as a teenager where we tried to light a bonfire and almost got arrested. Most of my other childhood parties involved bowling, mini-golf or being scared a girl would ask me to dance.

I always force a banana on my children. I’m more museli, fruit, and yogurt.