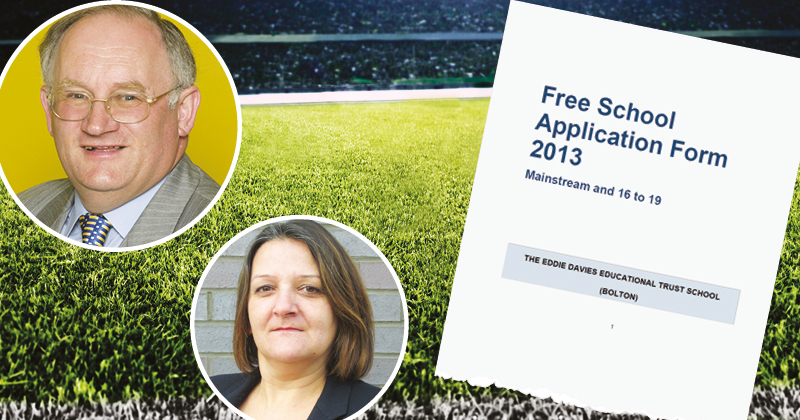 The closing Bolton Wanderers Free School (BWFS) is facing more scrutiny after promises in its original application appear not to have been fulfilled and “supporters” distance themselves from the school.

Schools Week revealed last week that BWFS, which is due to close in August because of financial concerns, paid almost £600,000 in rent and utility bills in just two years to its football club sponsor, Bolton Wanderers.

The school was established by the Eddie Davies Education Trust, a charity named after the club’s former owner, Eddie Davies.

A councillor in Bolton has now threatened legal action after finding the school said he “committed to supporting” its application to open, which was sent to and approved by the Department for Education (DfE) in 2013.

John Walsh was one of several “supporters” included in the school’s proposal. The TV presenter Vernon Kay and the boxer Amir Khan were also listed, while seven other names have been redacted on documents seen by Schools Week.

When approached to comment on the demise of the school, Walsh said he never supported the school and was “horrified” to find his name was involved in the application process.

I did not subscribe to the proposal. If they have included my name I will be taking that up with my lawyers

“I did not subscribe to the proposal. If they have included my name I will be taking that up with my lawyers,” he said.

The application also said that the University of Bolton, one of several sponsors of the school since it opened in September 2014, would deliver continuing professional development for teachers at BWFS and offer “foundation degree modules” to selected pupils.

However, when Schools Week asked the university if it had kept the promises, a spokesperson would only say it had “offered assistance to the school since it became apparent that it was in difficulty”. Zubair Hanslot, the university’s provost, was brought in as chair of governors following the school’s “inadequate” Ofsted report last September.

But the spokesperson added: “Sadly, such was the situation at the school that we [University of Bolton] have been unable to rectify matters, hence its closure.”

The university did not respond to repeated attempts to clarify if any support was given to the school before its difficulties, or if the offered training was delivered.

Micon Metcalfe, director of finance at Dunraven school in south London, also questioned the financial viability of BWFS’s timetable. She said she was
confused as to why the DfE ever approved such a proposal.

The 16-19 free school, which has capacity for 200 pupils but only reached 95 last year, promised a teaching day that ran from 7.30am to 5pm.
This was to be run 40 weeks of the year, alongside an optional extra six weeks of teaching via a “summer school”.

Metcalfe said there was a “mismatch” between the projected pupil numbers and proposed timetable “against the actual reality of how the school operated”.

“The school’s model could only have worked if it recruited the student numbers projected and been able to gain good Ofsted ratings – and even then it would have required excellent financial planning and management.”

She added the government’s free school programme did “aim to encourage innovative bids” but this carried “risk”.

Walsh said the school had been “very poorly run” and its pupil numbers were “never sufficiently high to make it a viable proposition”.

In its initial application, BWFS also said that an ongoing £100 million regeneration project at Bolton Arena and the football club’s Macron stadium, where the school is accommodated, would save capital costs and keep annual maintenance costs at a “viable” level.

But as Schools Week revealed last week, the club charged the school £595,000 in rent and bills in two years – an “extortionate” sum, said Mary Bousted, general secretary of the Association of Teachers and Lecturers.

When asked about the discrepancies in the application, Toni Carr, BWFS principal, said the steering committee that established the school was directed by its former chair Phil Gartside, who died last year.

“As he is no longer around we are unable to provide you with specific answers to your questions. We can, however, state for the record the current governors and staff at BWFS were not involved in the free school application”.