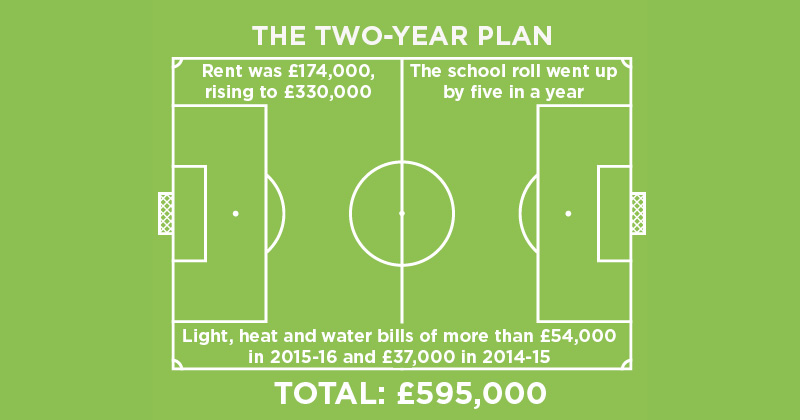 An “inadequate” school linked to a former premier league football club and now closing in August because of financial concerns, paid almost £600,000 to the club in rent and utility bills in just two years, Schools Week can reveal.

Bolton Wanderers Free School (BWFS) opened in September 2014 after it was established by the Eddie Davies Education Trust, a charity named after the club’s former owner, Eddie Davies.

The club, relegated from the premier league in 2012 and now in league one, is named as one of the school’s lead sponsors in all published accounts for the school. Five other sponsors are named.

During its first two years the school paid Bolton Wanderers £504,000 to share its Macron stadium under a “non-cancellable operating lease”.

The money “should have been for the education of children, but instead has been fed into a league one football club”

Schools Week asked BWFS the cost of this year’s rent and utilities, due to be paid in August, but Toni Carr, the school’s principal, said that due to “commercial sensitivity we are unable to provide information with regards to the contractual lease between BWFC and the trust”. Bolton Wanderers also declined to comment.

Mary Bousted, general secretary of the Association of Teachers and Lecturers, said the rent was an “extortionate” amount of public money that “should have been for the education of children, but instead has been fed into a league one football club.

“It seems virtually anyone can set up a free school and then charge extortionate amounts for rent and buildings.”

This August’s payment will need to be found on top of £500,000 the school owes to the government after it received funding for more pupils than it had on roll, as revealed by Schools Week earlier this month.

The shortfall in pupil numbers reduced the funding to a point which was “financially unviable” according to trustees who announced the closure.

According to documents seen by Schools Week, redundancy costs would have totalled £165,000 had the school closed last year. That figure is likely to be similar when the school shuts this August, but Carr said the trust had “endeavoured to make savings across the board, and will continue to do this whilst also meeting its contractual duties”.

Christine Bayliss, an academy trust founder and former civil servant involved in setting up free schools, said she hoped the Education Funding Agency would “get involved” so the taxpayer did not bear all the costs.

Bolton Wanderers Football Club is itself in debt, owing eight times its annual income. Its latest accounts show that it owes about £190 million; its revenue in 2015 was £23 million.

Last year it was issued a winding-up order, but it was given extra time to raise short-term funds.

All of this is at the expense of the taxpayer

Schools Week asked the club if it had given any money or benefits to BWFS to support the education of pupils. It declined to comment.
Bolton is not the only football club that has set up a school in recent years.

Tottenham Hotspur sponsors the Tottenham UTC. The UTC rents space for its school from TH Property Ltd, a property company which is part of a group of firms running Spurs.

The company has received about £500,000 in rent since 2014 for Tottenham UTC’s use of its buildings.

A Spurs spokesperson told the Guardian that the “rent and rates” figure had not actually been spent in cash, but represented an accounting allocation of a proportion of costs related to a 35 year lease. He did not respond to the Guardian’s request to explain how much cash had been received.

The UTC will close this summer having failed to attract enough students. It had just 134 pupils on roll in January 2016.

“All of this is at the expense of the taxpayer,” Bousted said.

“Their money should be going to educate children but it is evidently being used for a whole range of different purposes.”

One governor paid £3,287 in expenses in one year

A governor at Bolton Wanderers Free School (BWFS) was paid £3,287 in expenses for attending what appears to be a maximum of four meetings during the 2014-15 academic year, the school’s accounts show.

Education leaders are calling for the Education Funding Agency (EFA) to investigate.

The 2015 BWFS accounts state: “During the period ended August 31, 2015, travel, subsistence and accommodation costs totalling £3,287 was reimbursed to one governor.”

The accounts show the governing body met for a maximum of four times throughout 2014-15, which works out at about £820 a meeting for the unnamed governor.

It certainly raises eyebrows and if I was the EFA, I might be asking a few questions about what that money has been spent on

Toni Carr, the principal of BWFS, would not name the governor in question, but said the expenses were “paid in line with policies put in place by the trust and governing body on the opening of the school”.

She would not say if the £3,287 was paid for anything other than the four meetings.

Christine Bayliss, an academy trust founder and former civil servant, said it was an “unusual” situation and she would “question the integrity of a trustee or director claiming such large expenses for attending what could be just four meetings a year.

“It certainly raises eyebrows and if I was the EFA, I might be asking a few questions about what that money has been spent on.”

Mary Bousted, general secretary of the Association of Teachers and Lecturers, said the school should be investigated for paying such a high amount.

The EFA has in the past investigated trusts that have paid high governor expenses.

The Education Fellowship Trust, which last month became the first to voluntarily give up all its schools, was investigated after it paid governor expenses of £45,000, including the cost of a fact-finding trip to New York.