Scores more system leaders have had their statuses stripped by the government after their school slumped below performance measures last year, new figures show.

Figures obtained under the freedom of information act show a sharp rise in the number of reviews the government has conducted into the suitability of national leaders of education (NLEs), national leaders of governance (NLGs) and also teaching schools.

The number of de-designations (people who were then stripped of their system-leader status) has almost doubled, from 123 in 2015-16 to 220 last year.

Reviews are triggered when system leaders no longer meet certain criteria, set by the National College for Teaching and Leadership, or fail to provide school-to-school support within 12 months or commit professional misconduct.

The Department for Education refused to provide the actual numbers of system leaders over the three-year period our figures covered, meaning we couldn’t compare the rising number of reviews.

But our data shows that system leaders being stripped of the status after their schools fell below progress and attainment performance measures has shot up.

The rising number of reviews also comes as the government urged more heads to apply for NLE status in October. The DfE recently commissioned researchers to investigate whether sending supportive letters to would-be applicants would boost numbers. 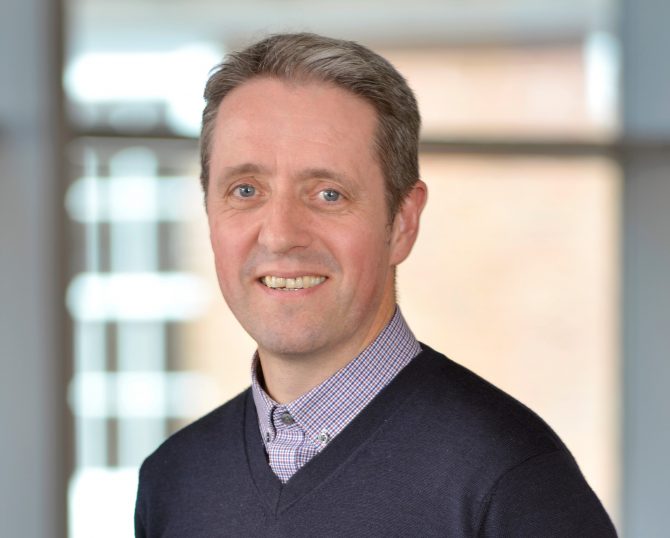 Robert Campbell (pictured), an NLE who leads the Morris Education Trust based in Cambridgeshire, warned the threat of losing the status could “incentivise heads not to work in the worst schools in the country” where improvement could take time.

Guidance states that heads who move school must have previously led a school judged ‘good’ for leadership in the last three years and be given that grade when inspected again to keep NLE status.

But even outstanding heads may “need at least three years” to turn a school around, warned Campbell.

Other reasons for losing designated status – professional misconduct, failure to deliver support to other schools or financial non-compliance – have not changed much over the last three years.

However, leaders losing their status because of a falling Ofsted judgment has dropped.

In a blog last year, NCTL chair Roger Pope said the college had “recently introduced new designation criteria for NLEs […] that rely less heavily on Ofsted judgments and more on timely and accurate data” – which explains the rapid increase in reviews because of progress and attainment data.

But an academy head in Essex, who did not wish to be named, had their NLE status stripped after four years when their school-performance data dipped. The school was graded ‘good’ by Ofsted and the leader said this seemed “contradictory”.

The head was informed by a letter, seen by Schools Week, which stated: “I regret to inform you that your National leader of Education designation […] will be removed.”

They said there could be a “more humane way” of removing the status, such as a phone call with a “thanks for their hard work”.

However Rob McDonough, an NLE who leads the East Midlands Education Trust with 13 academies in Nottinghamshire, said designations should be reviewed if performance measures are missed, because “it will be hard to have credibility as a school leader advising others if your own school has slipped”.

When system leaders are identified as falling below eligibility criteria, they are informed that they can submit supporting statements providing context about their school and their impact to persuade the NCTL review panel not to drop their designation.

A review panel – made up representatives from the teaching school council, the DfE and a former Ofsted Her Majesty’s Inspector – then decides the outcome.

Of 140 reviews of national leaders of governors last year, 60 per cent kept their designation.

Meanwhile out of 135 reviews of teaching schools last year, almost 40 per cent kept their designation. Finally, of 286 reviews of national leaders of education, a third were kept on. 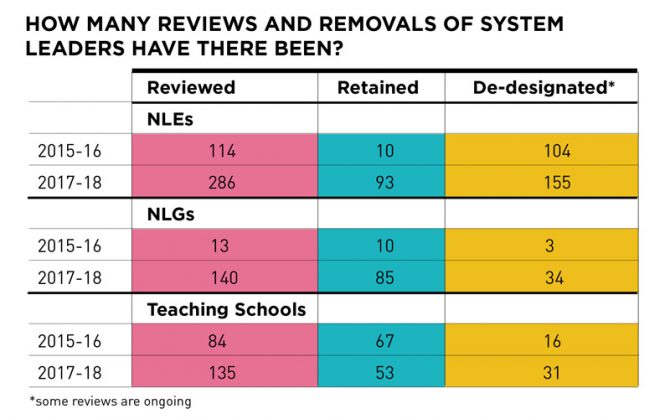 The Department for Education told Schools Week it is now reviewing how it can make “various improvements” to its system-leader designations, but would not provide further details.