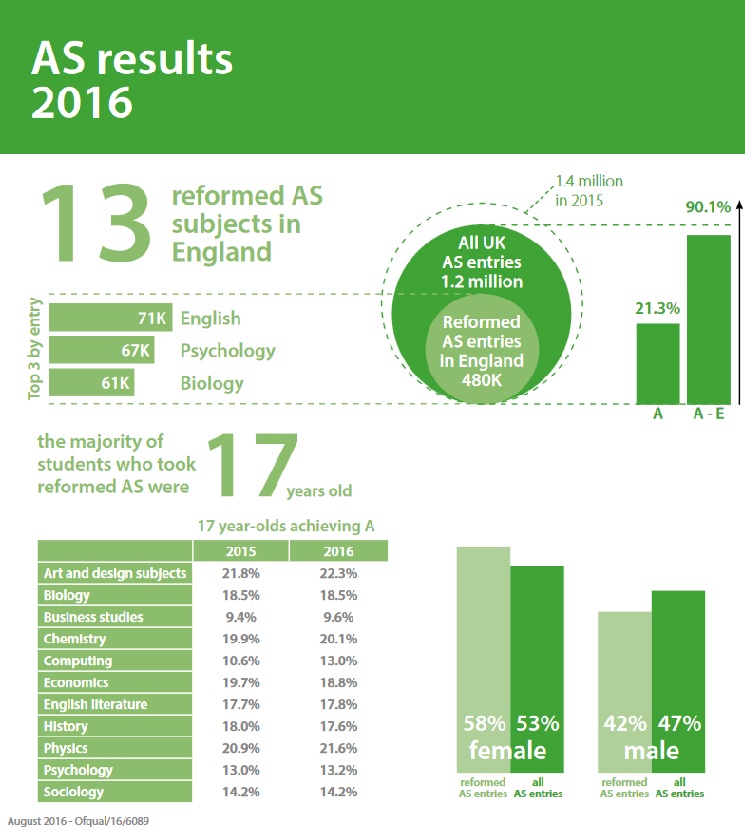 Some AS levels this year were exactly like ones last year. Others are nothing like AS levels in the past. Because of this, the results are difficult to disentangle. We can find some meaning in the results.  But we have to be very careful.

Why are the new AS levels totally different?

For the first time, some of the AS levels are a completely standalone qualification. They will not count towards a pupil’s overall A-level grade.
So, from the perspective of giving a head’s up to what a pupil’s A-level results will be next year, they’re pretty useless.

Which subjects are included in the new AS levels this year?

When you see statistics related to these subjects they are likely to be a little screwy. For example, we can see this year there has been a large decrease in the number of English, history and psychology AS levels. What we don’t know is if this means fewer people are taking the subject, or if they just chose not to take the optional AS papers. (After all, the papers don’t count towards the final grade anyway).

Are the new AS-levels more difficult than the old ones?

So far, the results suggest the AS levels are not more difficult. This is a touch surprising as one of the reasons for the change to the A-level structure was to make them “more rigorous”.

One reason why the grades may not have changed greatly is because the way they are regulated ensures they are quite stable anyway.

Are fewer people doing AS levels?

As AS levels are now optional, a long-standing question is how many schools will continue to offer them. For now, it seems the majority of schools and colleges are entering pupils for the AS.

Ofqual’s figures show that between 20 and 32 per cent of schools who previously entered pupils for AS levels in a subject are now not entering anyone, depending on the subject.

So, around a third of schools that previously entered pupils for Art & Design AS levels did not do so this year. It could be that the school is no longer doing the subject at all. It is more likely that they are simply waiting to put pupils into the full A-level.

So does this mean the attempt to stop AS levels has failed?

Not quite. Only a few subjects have changed format this year. Pupils doing other subjects – for example, maths – are operating under the old AS module system. Because of this schools might have kept pupils doing AS levels in everything just to keep things even, and to test out the new system. Only as other subjects are reformed over the next two years, will we finally know if the experiment has worked, and AS levels will disappear.

The big unanswerable questions: how should you advise AS-level pupils about what to do next?

Previously, if a pupil got great marks in their A-level, it was worth sticking with the subject, banking the points and moving to the next exams. If they were bad, you could resit the AS year, or at least resit the AS scores.

For the newly-reformed subjects AS points will not count towards a pupil’s final A-level. And it won’t necessarily be the case that because a pupil did badly in one subject this is how the whole A-level will turn out.

Resitting the year is unlikely to be a benefit, in the sense that simply getting better grades next year in AS won’t make much difference either. BUT, if grades are poor it could flag an issue with their choices.

Ultimately, it is going to be a judgment call. For everyone. Universities are differing in how they are planning for next year’s results; we don’t know what will happen when the schools who haven’t yet been in the AS system get added to the overall scores; and there’s no saying how the full A-level qualifications, which are a totally separate qualification, will be next year compared to the AS ones.

All school leaders can do is give their best call based on the pupils and the information available. Good luck!