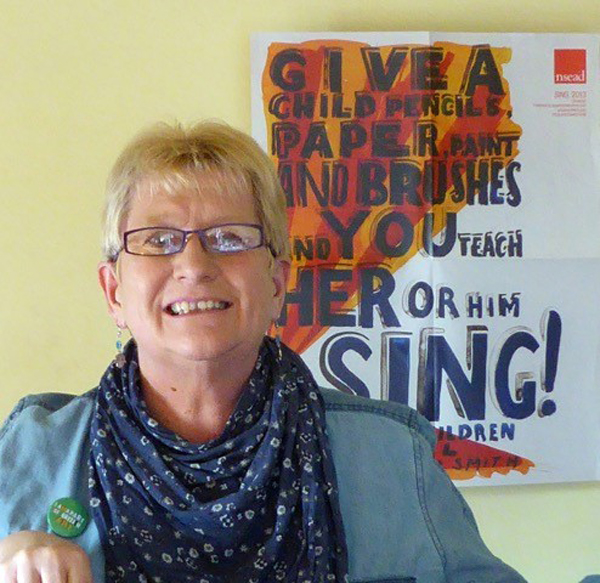 Art teachers are experiencing “fear and panic” as they are forced to teach subjects in secondary schools that they are not trained in, says a professional association.

The National Society for Education in Art and Design (NSEAD), which represents art educators, told Schools Week that a number of members are concerned that curriculum changes means they are being asked to teach outside their specialism.

The association’s immediate past president, Susan Coles (pictured), said: “I don’t believe this issue was as prominent last year. Anecdotally there more and more people are saying that this year they are being asked to teach other subjects.”

NSEAD is now surveying its members on the impact of government education policies on the provision of art, craft and design.

She said changes to the ways schools were held accountable for performance, including the introduction of the EBacc, were restricting the freedom for pupils to take art and design.

In response to a letter from NSEAD, education secretary Nicky Morgan said she has not yet identified “clear evidence that the introduction of the EBacc as a performance measure is having an impact on the take-up of subjects like art and design”.

Ms Coles said: “When an art teacher gets their timetable and they’ve (been given) a second subject, there’s fear and panic because they are generally single-subject specialists.”

One art teacher in a secondary school in the North East told Schools Week that she had been asked to teach humanities from next year.

“Since the introduction of the EBacc and the reduction of options, the numbers of students being able to choose art has fallen from three classes to one, which will have an impact on sixth-form numbers. Due to our reduced numbers, I have been informed that I will be teaching humanities at key stage 3 next year.

“The thought of teaching humanities fills me with dread as it bears no resemblance to my own subject. I will not be given any training or any extra support to enable me to deliver or plan stimulating lessons and I will be expected to make and grade a subject that I don’t understand.”

A spokesperson for the Department for Education said: “We trust schools to make decisions over staffing. Although teachers will specialise in particular areas, schools may ask them to teach other subjects where appropriate.

“The government is ensuring all pupils experience a broad and balanced curriculum – and the arts are a key part of this. Art and design and music are compulsory subjects within the national curriculum for 5-to 14-year-olds, and the number of pupils taking these subjects at GCSE is rising.”

NSEAD’s survey closes on July 22. Its results will be presented to the all-party parliamentary group on art, craft and design early in the autumn.