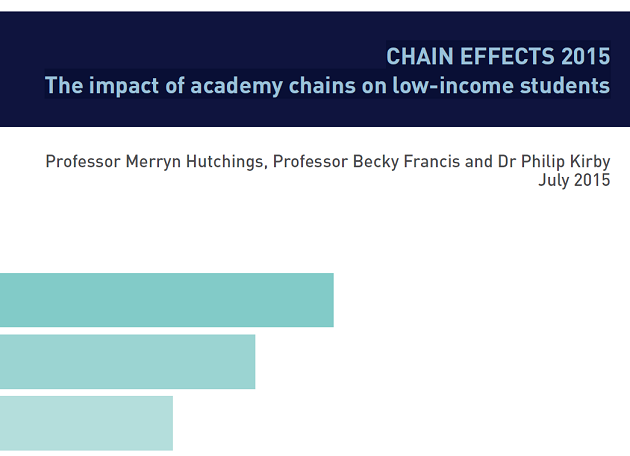 Almost half of all academies could fall within the government’s new “coasting” definition and three in four academy chains have “coasting” schools within them, a study by leading academics has revealed.

Analysis of 2014 data for 273 academies in 34 chains by London Metropolitan University Professor Merryn Hutchings, King’s College Professor Becky Francis and Sutton Trust research fellow Dr Philip Kirby has revealed that 44 per cent of those sampled would be considered “coasting” under the government’s new label.

Although the research found that disadvantaged pupils outperformed the average for all state-funded secondary schools in 11 of the 34 chains, it also found that 26 of those studied included at least one “coasting” school.

The report, Chain Effects 2015: The impact of academy chains on low-income students, calls for an expansion of the pool of school improvement providers beyond academy sponsors and a “clear and rigorous criteria” for all providers based on “quality, capacity, strategic model and track record”.

It also says new chains should not be allowed to expand until they have a “track record of success” in bringing about improvement, calls for funding agreements with new sponsors should be shortened from seven to five years, and demands that the government include a measure of progress for disadvantaged pupils in their definition of coasting schools, “to be applied to all school types”. Professor Francis, pictured, said: “There is very significant variation in outcomes for disadvantaged pupils, both between and within chains.

“Some chains continue to achieve impressive outcomes for their disadvantaged students against a range of measures, demonstrating the transformational impact on life chances that can be made.

“However, a larger group of low-performing chains are achieving results that are not improving and may be harming the prospects of their disadvantaged students.”

The report has led to calls for a re-think of government policy from unions and the Labour Party, but has been branded “misleading” by the Department for Education.

Nansi Ellis, deputy general secretary of the Association of Teachers and Lecturers, said: “This report confirms the Government’s own recent evidence that in nine of the 20 larger chains, pupils made significantly below average progress. It also shows that only ten of the 100 larger local authorities performed as badly.

“The most important result is that two of the three ‘successful’ chains and 12 of the ‘successful’ LA’s are London based, where much of their success is down to the collaboration of schools in the London Challenge.

“Academisation is not the answer to schools problems and there is no robust evidence, overall, that academies nationally outperform other types of school.”

National Association of Headteachers general secretary Russell Hobby said the findings would be “troubling for government policy”, as they suggested “no clear difference between the performance of many sponsored academies and mainstream schools”. Shadow education secretary Tristram Hunt repeated concerns raised by his colleague Kevin Brennan during the committee stage of the education and adoption bill that the legislation did not contain a “single concrete measure for tackling underperformance in academy schools”.

Dr Hunt added: “The Tories think that the way to turn around underperforming schools is to simply convert them into academies and then walk away, yet they have no plan for those academies that are struggling, leaving them to fail or ‘coast’ and letting down the children who attend them.

“Labour understands that it takes more than this to drive up standards in our school system. We need a strong focus on raising the quality of classroom teaching and support for head teachers, greater collaboration between schools at a local level, and robust local oversight of schools to stop underperformance going unnoticed and unchallenged.”

A Department for Education spokesperson said: “It is wrong and misleading to try to classify coasting schools based on 2014 data alone. A coasting school can only be identified based on performance over three years, so we won’t know until 2016 which schools they will be.

“The academies programme has transformed the lives of millions of pupils, particularly those from disadvantaged backgrounds, as this report shows. We are already working with many excellent academy sponsors and are recruiting more to pair with struggling schools so every child has access to the excellent education they deserve.”

Read an expert article by Professor Francis on the report here.