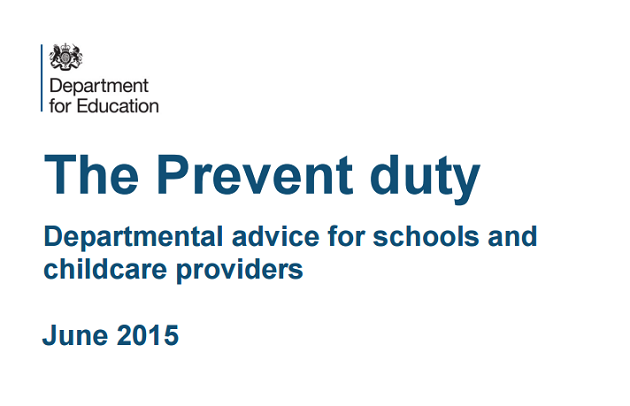 Guidance to help teachers spot the warning signs of radicalisation among pupils has been published by the government, including advice on social media and common phrases and propaganda used by terrorist groups like Islamic State (ISIS).

The guidance has been issued to coincide with the activation of the ‘prevent’ duty, a legal requirement from July 1st placed on schools, councils, prisons, police forces and health bodies by the counter-terrorism and security act 2015 to “take steps to prevent people from being drawn into terrorism”.

The Department for Education and Home Office have issued the joint advice in the form of two documents, one containing general guidance on risk assessment, partnership working, training, IT policy and building resilience, and another which focuses on social media.

In the social media document, teachers are alerted to common propaganda and terminology used by ISIS to attract young people to its cause, and urged to follow existing school safeguarding procedures where concerns are identified.

It says: “In the same way that teachers are vigilant about signs of possible physical or emotional abuse in any of their pupils, if you have a concern for the safety of a specific young person at risk of radicalisation, you should follow your school’s safeguarding procedures, including discussing with your school’s designated safeguarding lead, and where deemed necessary, with children’s social care.

“If you are in a ‘prevent’ priority area, your local authority will have a ‘prevent’ lead who can also provide support.”

According to the government, the overall aim of the advice is to clarify what the prevent duty means for schools and childcare providers, outline what they can do to help protect children, make clear what schools should do to demonstrate compliance with the duty and inform them about other sources of information, advice and support.

Education secretary Nicky Morgan said: “Extremism has no place in our schools but recent events have shown that the risks of young people being targeted by radical groups have risen and should not be underestimated.

“Nothing is more important than keeping children safe from harm. Schools already play an important role in protecting and safeguarding young people including from radicalisation and extremism.

“That is why we have issued advice to schools and childcare providers to help them understand their role under the new prevent duty, which comes into force today and which reinforces their existing safeguarding duties.”