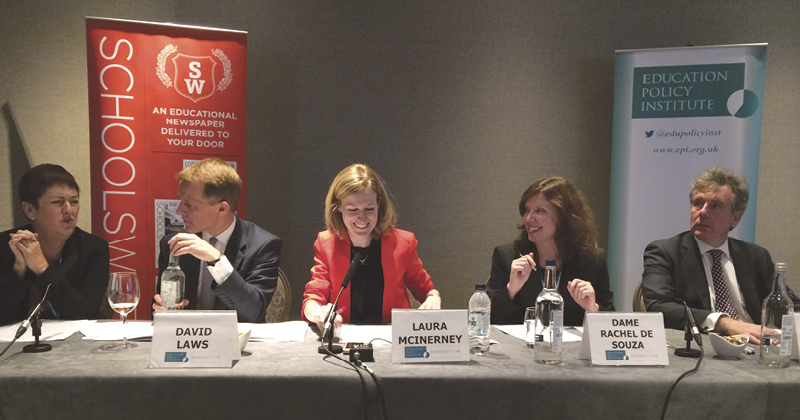 Councils could soon have scrutiny powers over academies similar to those they already have for health bodies as the government seeks to boost mechanisms for intervention in schools.

Schools Week understands the Department for Education (DfE) is in talks about replicating the work of council “health scrutiny boards” to address fears about the quality of some academies and the trusts that run them.

It follows warnings from union leaders that councils are powerless to intervene when they hear about educational underperformance and poor attendance in academies, and after MPs questioned the accountability of the government’s network of schools commissioners.

Existing scrutiny boards or committees allow councils to hold local health bodies to account. They can interrogate those responsible for health services in their area and investigate the claims of constituents.

Mary Bousted, general secretary of the Association of Teachers and Lecturers, told a Conservative party conference fringe event, hosted by Schools Week and the Education Policy Institute (EPI) on Wednesday, that the DfE’s “latest thinking” was that it should “reinstate in local authorities the same functions that they have for health”.

The education select committee called for better “transparency, accountability and working relationships” in the system

She blamed a lack of “real accountability” for a situation in which councils knew of problems in academies, but “cannot get into that school”.

Extra powers would allow them to summon chief executives or heads of underperforming academies or those not taking their fair share of hard-to-reach children, and make recommendations that it could pass on to the education secretary.

“I know that [Justine Greening] is looking at that because the secretary of state is concerned about those vulnerable schools, and I think she’s right to be concerned. I do not think the current levers are strong enough.”

But it is not just the teaching unions that have expressed concerns about the powers of local and national government to intervene in failing academies and multi-academy trusts.

In a report on the work of schools commissioners, released at the beginning of this year, the education select committee called for better “transparency, accountability and working relationships” in the system, which members warned could be seen as “undemocratic and opaque”.

David Laws, the former schools minister, has also described problems with dealing with “failing multi-academy trusts”, and claimed that the DfE had gone through a period of hoping that converting schools to academies alone would be a recipe for school improvement.

“If the department was good at dealing with failing MATs, we wouldn’t expect them to be over-represented both at the top and the bottom of performance tables – and they are at both primary and secondary,” said Laws, who now leads the EPI.

“When I was a minister, about a third of individual academy schools were a cause of some DfE concern, either because they had a low Ofsted rating or low progress scores.

“All these things suggest to me that we’ve gone through a period where the department rather hoped that academisation by itself would deliver improvement.

“What we’re discovering, some may say unsurprisingly, is that a mechanism that puts the right leadership, governance and teaching quality into schools, and not just thinking that moving them automatically away from local authorities, will transfer their performance.”