A new report into tackling the issues faced by the teacher labour market in England has been released by the Education Policy Institute.

The report, which focuses particularly on the lack of teachers with relevant degrees teaching “high priority” subjects such as maths and science, has recommended the government offers financial bonuses and incentives for teachers in those subjects or working in deprived areas.

Here are seven things that we learned.

1. Less than half of key stage 4 maths lessons taught by teacher with maths degree

The proportion of key stage 4 maths lessons taught by teachers without a degree in maths was 46 per cent. When including science degrees that figure is pushed up to just over 50 per cent, though.

Just under 70 per cent of physics lessons were taught by teachers with a degree in science, the report found. 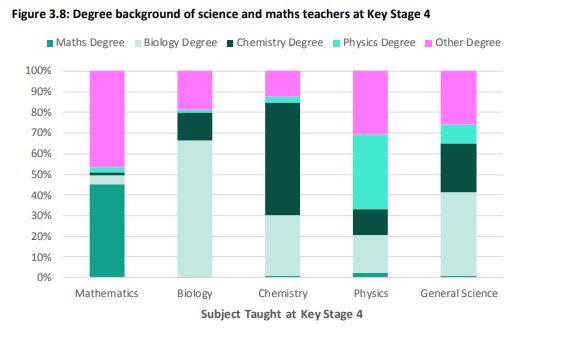 2. Deprived areas outside of London have fewer specialist teachers

However, less deprived schools outside of the capital are likely to find that 52 per cent of physics teachers, 51 per cent of maths teachers and 68 per cent of chemistry teachers have a relevant degree.

Inside London, the proportion of maths and physics teachers with a relevant degree is higher, at between 40 and 50 per cent, and mostly above 60 per cent for chemistry. There is also less evidence of variation by deprivation.

There is also a variation in access to specialist teachers across the country, with particularly low levels across the south coat, Welsh Borders and South and West Yorkshire, the report found.

3. Financial bonuses kept teachers in the classroom in America

Bonus schemes for teachers in North Carolina, Florida and Washington state helped with recruitment in priority subjects or deprived areas, the report found.

EPI said the schemes showed that incentives worth about five per cent of gross salary can reduce teacher exits by about 10 to 20 per cent.

4. Some teachers could earn a lot more in the private sector

Teacher shortages are greatest in the subjects where graduates could have higher salaries in the private sector. Maths teachers in their late 20s earn about £4,000 less than the average salary for maths graduates as a whole, but graduates of English, history and biology earn £4,000-£5,000 less than teachers on average.

5. Recruitment and retention is getting worse

This problem is particularly acute early in teachers’ carers, with just 60 per cent of teachers working in a state funded school in England five years after starting training. For high priority subjects like physics and maths, this slips to 50 per cent.

The EPI warns that the pay increase teachers are set to receive next month will make “little difference to the overall picture of large real-terms declines in average teacher pay over the last decade”.

It said there was “little good quality evidence” to suggest current government bursaries have been effective at encouraging more teachers to join the profession, while a pilot student loan reimbursement programme for early career teachers in shortage subjects will have “little effect”, as the starting salary for a teacher is below the loan repayment threshold.

The EPI’s conclusions aimed at boosting teacher recruitment and retention have not had a glowing response from unions. The National Education Union warned against its “divisive and overly simplistic measures” and the Association of School and College Leaders said its recommendations around bonuses for teachers would be “unfair and demoralising” for those not receiving extra cash.

The National Association of Head Teachers has called for the government to instead focus on alleviating the “pressure of a punitive accountability system” in order to solve the recruitment and retention crisis.