Younger primary school pupils will need the “most support” to recover from the Covid-19 pandemic, researchers have said, after finding those in key stage 1 saw the biggest drop in attainment by the end of the last academic year.

Analysis by RS Assessment and SchoolDash also found that had national tests been held for year 6 pupils this year, it is “likely” that attainment seen in 2019 would only have been replicated in reading, but not in maths or grammar, spelling and punctuation.

The paper analysed attainment among primary pupils in England at the end of the last academic year.

It used aggregated results from more than 250,000 tests from more than 1,000 schools in the summer, and compared them to the last “uninterrupted” summer term in 2019, as well as the spring and autumn terms of the last academic year.

1. KS1 most in need of support

The report concluded that across all subjects, younger year groups are showing the largest drops in attainment and are “therefore needing the most support”.

The report also warned that the disadvantage gap continued to grow across most year groups and subjects.

If national tests for year 6 pupils had been held this year, it is “likely only reading would have had a similar number of pupils reaching the expected standard as prior years”.

2. Reading ‘close’ to prior attainment for years 2 to 6, but year 1 still behind

The report analysed the “pattern of changes” in attainment in reading across the three terms in 2020-21, and found a “relatively positive” picture for children in years 2 to 6.

By the end of the summer term, average results were “close to those” seen in summer 2019 for these year groups.

However, year 1 children may be “as much as 3 months behind” previous cohorts, compared to about a month for most older year groups. This suggests that “most support” is needed for year 1 pupils, the report said.

The report also warned that the disadvantage gap “appears to have grown significantly” among year 1 pupils.

Changes in other year groups are “much less significant”, but still remain at five to six months, showing “much work remains to be done”.

Year 6 reading results showed “very similar distributions” in 2019 and 2021, and the report found the proportion of pupils who may have gone on to achieve the “expected standard” in their SATs was “stable” across the 2019 and 2021 cohorts.

3. Year 6 further behind in grammar, punctuation and spelling

Despite improvements since the spring term, most primary pupils were still likely to be between two and three months behind in grammar, punctuation and spelling at the end of the summer term compared to 2019.

However, the analysis suggests year 6 pupils were further behind still, at four months.

The analysis also shows the disadvantage gap growing across all age groups, reaching as much as seven months among year 1s.

The report estimated that an additional 13 per cent of children may have failed to meet the expected standard in year 6 tests had they gone ahead.

Authors said secondary schools “may need to give extra support to ensure that their new intake of year 7 children have mastered these more technical aspects of English before progressing to the usual Key Stage 3 curriculum”.

Declines in attainment were higher in schools in areas with high levels of deprivation and in the north of England.

4. Younger pupils up to 3 months behind in maths

Although the analysis found improvements across all year groups in maths since the spring term, younger year groups “still showed large declines” compared to 2019.

It found that children were still on average two to three months behind previous cohorts in the summer. 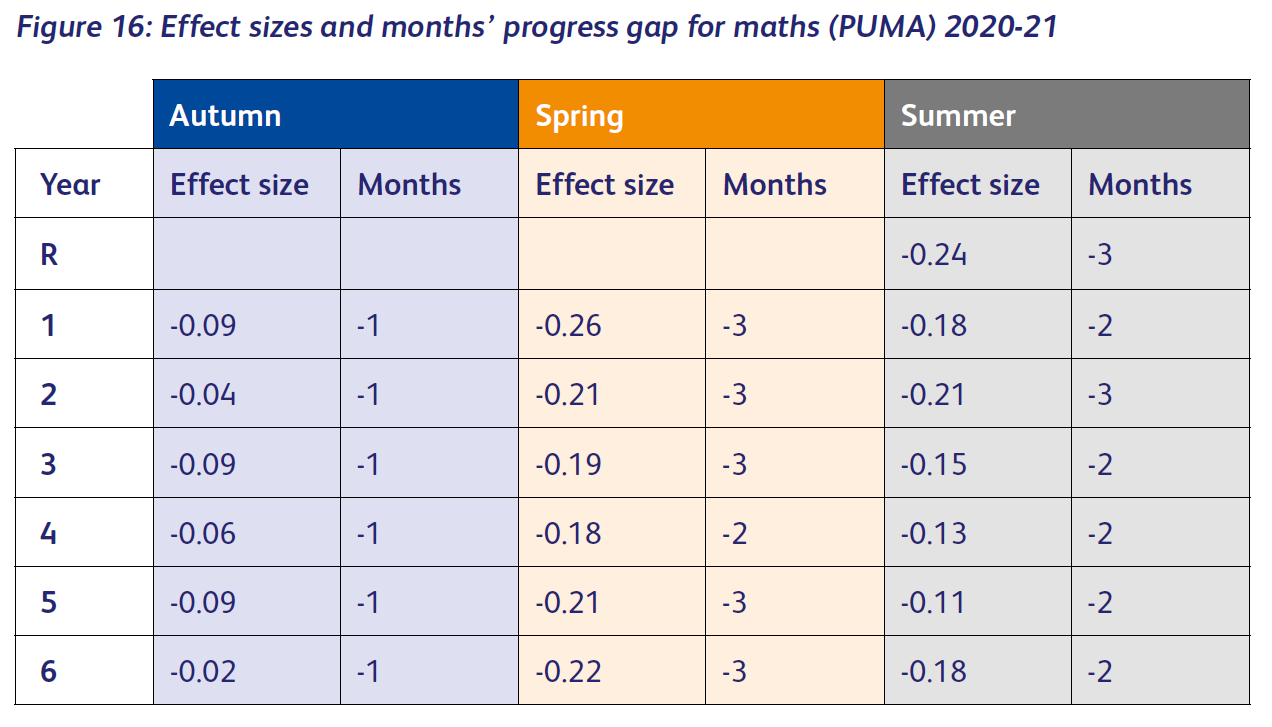 The attainment gap has also continued to grow across most year groups, with the largest gap in year 6. The gaps “equate to around six months of learning between the two groups, or even seven months for year 6 pupils”.

The decline in performance means around 5 per cent more year 6 pupils “might” have failed to achieve the expected standard in their SATs.

The report also found that a “surprising pattern” identified in the autumn term of larger falls in maths attainment in the Midlands continued into the summer term.

However, schools in the north saw the greatest declines in years 2 and 6.