Less than a third of people believe acts of worship like prayers are appropriate for school assemblies, prompting calls for a change in the law.

The Accord Coalition for Inclusive Education has urged the government to replace the law demanding daily collective worship in state schools with guidance on how to provide “genuinely inclusive” assemblies for pupils of different backgrounds.

In a survey of over 1,600 people in England, Scotland and Wales, half (50 per cent) said it was not appropriate for acts of worship of any religion to take place in state school assemblies, with just 28 per cent supporting the prayers.

The survey, conducted by YouGov and commissioned by Humanists UK, also found that just 48 per cent were in favour of education about religion and beliefs during assemblies, with 32 per cent finding this inappropriate. 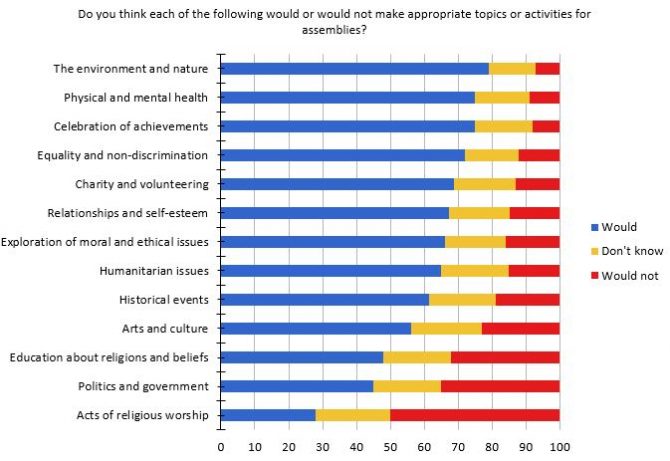 The Reverend Stephen Terry, chair of The Accord Coalition, said the requirement was “divisive, anachronistic and a barrier to schools providing stimulating and inspiring assemblies that are genuinely inclusive”.

“Schools should instead be encouraged and able to provide assemblies that investigate and forge shared values, from a variety of sources.”

Since 1944, all state schools have been required to provide a daily act of worship that is “wholly or mainly” Christian in character.

Between September 2015 and April 2017, 46 schools asked to opt out of the worship requirement. Parents can also withdraw their children from collective worship.

Two parents recently launched a high court challenge against the religious assemblies of Burford Primary School in Oxfordshire, which had no religious character until it joined the Church of England’s Oxford Diocesan Schools Trust in 2015.

Lee and Lizanne Harris withdrew their children from the assemblies, but alleged the school failed to provide meaningful alternative education for them.

Ofsted stopped inspecting collective worship in 2004, after 76 per cent of schools were found to be non-compliant.

Acts of worship were deemed the least appropriate assembly topic or activity in the YouGov poll, followed by discussions about politics and government which were supported by just 45 per cent of respondents, and said to be inappropriate by 35 per cent.

The Reverend Nigel Genders, the Church of England’s chief education officer, said collective worship contributes to schools through “stillness and reflection, to pupil and staff wellbeing, bringing the school community together to explore values.”

“The topics listed in this survey – morality, self-esteem, our environment, our history and many others – are just the kind of subjects which can be explored meaningfully through collective worship.

“It offers a way to do that beyond the the normal opportunities available within the regular curriculum, as well as an understanding of how 80 per cent of the world’s population respond to such issues from a position informed by their faith.”

A spokesperson for the Department for Education reiterated said collective worship “encourages pupils to reflect on the concept of belief and helps shape fundamental British values”.