The government has released the latest data showing the performance of the regional school commissioners in their second year of the job.

A new set of performance indicators were used that year, and Schools Week has crunched the data to show how the RSCs measured up in each of the categories – and whose has done best overall.

Dominic Herrington, the regional schools commissioner for south London and the south-east, was the best-performing RSC in 2015-16, according to Schools Week’s analysis of the latest government data.

Herrington, who has done the job since July 2014, came top by 4.5 points, bringing him up from third place last year, when Pank Patel, the former RSC for the west Midlands, scooped first place.

The RSC for the north, Janet Renou, came last for the second year running – scoring half as many points as Herrington.

In second place, the south-west region was overseen by two commissioners during this period: the current national schools commissioner Sir David Carter, between September 2015 and April 2016, and his successor Rebecca Clark, once a boss at the Oasis Academy Trust. Clark stepped down in September 2017 and the role now belongs to Lisa Manall.

Third place went to Martin Post, for the north-west London and south-central England region, and fourth to Tim Coulson in the east of England and north-east London, who stepped down to become the new chief executive of the Samuel Ward Academy Trust and was replaced by Sue Baldwin at the start of this academic year. Vicky Beer in Lancashire and west Yorkshire was in joint fifth place with Patel in the west midlands, who resigned in May 2016 to be replaced by Christine Quinn.

The former RSC for the east Midlands and Humber region, Jennifer Bexon-Smith, came second to last, scoring only 6.5 points more than Renou. She has since retired and been replaced by John Edwards.

The RSCs have a range of powers devolved from the education secretary, including converting underperforming schools into academies, sending warning notices if academies fall below expectations and deciding whether schools can expand.

Schools Week analysed their performance data published in the latest annual report and accounts for academies in England in 2015-16.

It is the first year the department has voluntarily published the information, following a successful campaign by Schools Week for more transparency. Previously we created our RSC league tables using data gathered from Freedom of Information requests.

As ever, we have constructed the tables using the government’s own “key performance indicators” which show how it judges its own RSCs.

Top scorers received eight points, second placed got seven, down to the worst performer, who gained only one point. In the case of a draw, a median score was given. Points were handed out based on who had improved the most in each KPI from 2015-16. We added up the scores to provide a final ranking. 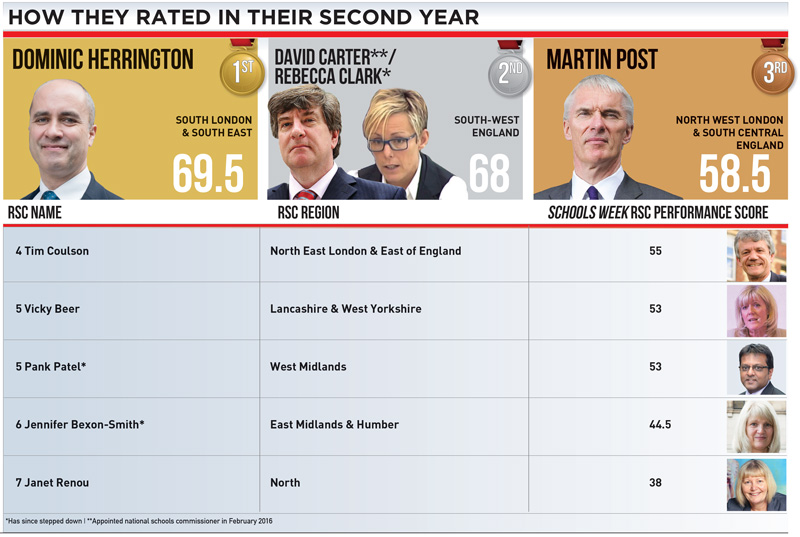 We awarded commissioners a score out of eight for each of the eligible KPIs for the second year of their work. Some KPIs were split into sections, meaning RSCs got more than one score for that measure.

The top scorers got eight points, the second seven, down to the worst performers who got one point. In the case of a draw a median point score was given.

Most KPIs were based on the progress the RSCs had made from the results at the end of their first year in 2015.

We totted up the score for their final ranking.

1. Percentage of schools that are academies

David Carter/Rebecca Clark (south-west) came top in the first category, boosting the percentage of academies in their region from 31 in September 2015 to 37 by August 2016. Vicky Beer (Lancashire and west Yorkshire) finished bottom, increasing her share by only two percentage points.

2. Percentage of eligible schools issued with an Academy Order

The floor standard is the minimum standard for pupil attainment and progress. As noted during previous reporting on RSCs’ performance data, we found this category unclear. Does the DfE consider it better for RSCs to have higher numbers of academies below the floor standard for one year, meaning there could have been an influx of schools below the floor that year, or higher numbers stuck below the floor for a series of years? We don’t know what good performance looks like based on these figures (and we don’t think the government does either) so we didn’t include it in our analysis.

4. Percentage of ‘inadequate’ academies, free schools, UTCs and studio schools that are in this category for more than 18 months.

This is another difficult metric. First, the category is split into three subdivisions: converter academies, sponsored academies, and “free schools, UTCs and studio schools”.

Also, two more pieces of information are given: the number of ‘inadequate’ schools in an area, and the percentage of those that are still ‘inadequate’ after 18 months.

The government says it uses the percentage as its key measure because it wants RSCs to ensure ‘inadequate’ schools turnaround quickly. But there’s a problem – the more inadequates you get and turn around, the better you look, leaving something of an incentive to allow schools to slip into the bottom category in the first place.

For example, Clark/Carter had the best result, paring their percentage of ‘inadequate’ convertor academies that were still ‘inadequate’ after 18 months down from 20 per cent to 13. But that was only because the number of such schools leaped from five to eight; a quirk of the maths meant the one school still struggling after 18 months in both years was less significant in the overall statistics.

Post came bottom because 67 per cent of his ‘inadequate’ schools kept their ratings for 18 months, where in 2015 this happened for none. But this happened because he went from having no inadequates for over 18 months, to having two.

For the percentage of sponsored academies rated ‘inadequate’ for more than 18 months, Herrington was the top performer, reducing from 44 per cent (four schools) to zero.

By contrast, Coulson’s percentage increased by 47 percentage points, with one extra sponsored academy holding an ‘inadequate’ rating for over 18 months.

For free schools, UTCs and studio schools Beer and Coulson did best, reducing their share holding an ‘inadequate’ rating for over 18 months by one each, or a respective decrease of 100 percentage points.

Renou had the opposite experience, increasing her share by one.

5. Number and percentage of academies, free schools, UTCs and studio schools below the floor or Ofsted ‘inadequate’ within first three years of being open

We gave six separate scores for this KPI, one for number and one for percentage in each for the three categories: “converter academies”, “sponsored academies”, and “free schools, UTCs and studio schools”.

Bexon-Smith, Beer, Coulson and Post all managed to keep their percentage of below-floor converter academies the same between 2015 and 2016. Renou, Herrington, Carter/Clark and Patel each increased by one percentage point.

For sponsored academies, Beer and Post each increased their share by one percentage point, while Renou was the worst performer, increasing hers by six percentage points.

In terms of raw numbers, Coulson did worst, with an extra 14 sponsored academies below the floor or rated ‘inadequate’ within the first three years of opening. Renou and Beer did best, with just an extra four each.

Post and Herrington saw their numbers of free schools below the floor standard or inadequate in the first three years increase by just one school each between 2015 and 2016.

6. Percentage of ‘inadequate’ maintained schools issued with an academy order within the average time

Patel topped the ranks in this category, increasing his percentage by 29 points between September 2015 and April 2016. Post came bottom, with zero.

7. Percentage of approved sponsors that are active in the region

For sponsors less than 12 months old, Coulson came out on top. He increased the percentage of approved sponsors active in his region by 31 percentage points.

Renou’s results were the worst, with the percentage of approved sponsors active in her region decreasing by 33 percentage points.

8. Number of free schools, UTCs and studio schools open in the region

Between September 2015 and August 2016, Post’s region did the best for the number of free schools, UTCs and studio schools, with an increase of 15 new schools. Coulson did the worst, with only one new school opening.

9. Number of free schools, UTC and studio school applications approved in the region

Finally, Coulson was the most successful in terms of the numbers of free school, UTC and studio school applications. The number of successful applications in the east of England and north-east London increased from two in wave 10 to 31 in wave 11.

At the opposite end of the scale was Renou, whose number of approved free school, UTC or studio school applications increased by only three between waves 10 and 11, from just one to four.