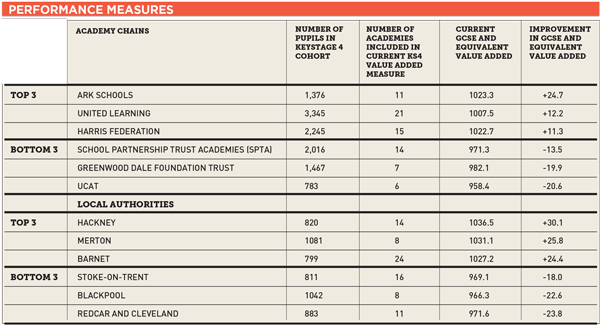 Multi-academy trusts (MATs) will be ranked on their performance in new league tables as part of a government accountability drive.

The paper states this is part of new accountability measures for MATs, which also includes continued publication and focus on inspection and performance data at individual school level.

It follows yesterday’s announcement by Chancellor George Osborne that all schools will have to become academies by 2022.

The paper read: “An effective accountability system ensures that professionals are held accountable for the outcomes of their decisions using fair, intelligent, reliable and carefully-balanced measures of success and failure.”

It states the measures need to avoid “creating perverse incentives or unduly hindering innovation” and must also recognise the risk and challenge teachers and headteachers take on when re-locating to work in the most challenging schools.

It states the measures will also give schools and groups “time to improve while reacting in time to avoid chronic failure that irredeemably damages any child’s education”.

Schools Week reported in March last year how the department was proposing measures to rate the performance of academy chains (pictured above).

Under those proposals, chains would be given a score for the value they add to pupil attainment between key stages 2 and 4.

The length of time an academy has been part of a chain would also be factored in, which ties in with the proposals set out in the White Paper.

Ark Schools, United Learning and the Harris Federation came out on top using the new metrics.

It marks a seemingly new approach from the government. The Department for Education turned down a freedom of information request in 2014 for the grades of academy trusts.

The department said disclosure of the information could destabilise academies sponsored by trusts.

The paper also reveals further details about conversion. It states an expectation most schools will form or join MATs so “proven educational models can spread and grow”.

It states, apart from in exceptional circumstances, the smallest schools will have to form a join a MAT, while other “successful and sustainable” schools will be able to continue as a single academy trust.