Eight of out ten teachers believe high stakes exams should be taken throughout the year, and most want more autonomy over testing, an exam board survey has revealed.

Pearson has published initial findings from its review into the future of qualifications and assessment in the UK.

The exam board said its consultation “did not find evidence of a strong desire” to remove GCSEs or replace our current assessment system with an entirely new one.

It is the first stage in the review, with a final report and recommendations expected by the end of this year.

Here’s are some of the key findings from the survey.

1. Testing should be done ‘throughout the year’

Opinion was split on whether tests should happen on demand when students are ready, with 56 per cent agreeing and 43 per cent saying they disagreed.

The government began to phase out modular GCSEs from 2012. New linear exams require pupils to sit all the tests at the end of the course.

Seventy-eight per cent of teachers surveyed agreed or strongly agreed that they should be given “more responsibility and autonomy” over student summative assessment.

Pearson said teachers generally felt all assessment types were effective, but with a “strong preference” for more regular assessment through the year, marked by them.

Asked about the effectiveness of different assessment approaches at “validating the acquisition of knowledge and skills” in 14 to 19 year olds, 61 per cent said end of term or year tests marked by a teacher were “very effective”.

Only 32 per cent of teachers said final high stakes exams were “very” effective.

3. Subjects ‘restricted’ by funding and accountability

A majority of teachers surveyed – 65 per cent – said they felt the choice of qualifications on offer at their school or college was “restricted by funding and accountability pressures”, while 22 per cent disagreed.

4. Teachers favour ‘option of both’ paper and computer tests

Respondents were asked which format they would prefer formative and summative assessments to take. 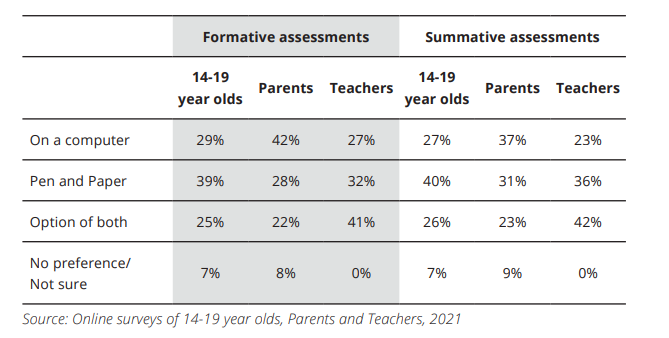 Nearly all teachers – 95 per cent – believed they needed more regular technology training for teaching and assessment to increase their confidence.