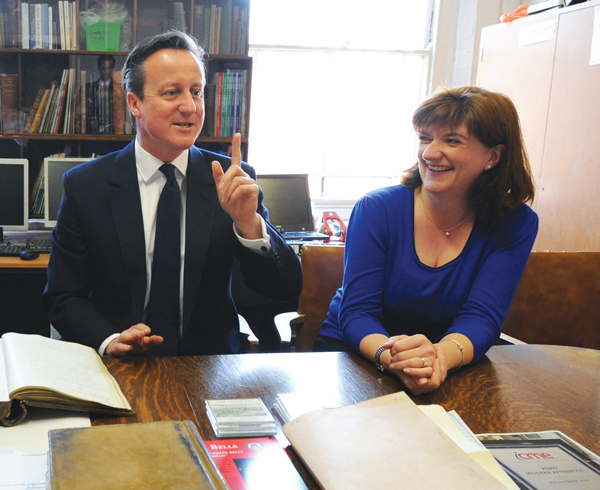 Nicky Morgan “fully backs” David Cameron’s commitment to continue to fund universal infant free school meals and has dismissed as “bizarre” claims that the government will approve “a raft” of new grammar schools, a Conservative source has said.

Rumours that the two politicians were not on the same page over the retention of free schools meals for all infant children in England arose after the prime minister announced his commitment to continue funding the programme, in contrast to previous reports that it was a possible target for the departmental cuts ordered by chancellor George Osborne.

A Conservative source told Schools Week that the education secretary backed Mr Cameron “all the way” on his support for free meals, repeating the prime minister’s comments that it was a manifesto commitment and so would be honoured.

The source also dismissed as “bizarre” Labour claims that the government plans to allow new grammar schools to open “up and down the country”, as reported by the BBC, claiming there was “no truth” in the allegations, despite a decision imminent on the expansion of the Weald of Kent grammar school.

The Conservative manifesto pledged to allow all good schools to expand, whether maintained schools, academies, free schools or grammar schools.

The Weald of Kent grammar school has asked permission to expand by opening a “satellite site” eight miles from its Tonbridge home.

The new shadow education secretary Lucy Powell this week repeated claims that grammar school expansion was on the cards and affirmed her commitment to fighting against the establishment of new selective schools.

During her speech to the Labour party conference in Brighton, she said: “[The Conservatives] seem to be focusing their energies on bringing back the 11-plus with new grammar schools.

“Not only is this the wrong approach but the evidence is really clear. Grammar schools do nothing for social mobility.”

She warned that “hot housing and private tuition” were “pervasive” among selective school applicants, adding: “It’s no wonder that just 3 per cent of kids on free school meals attend grammar schools.

“That’s the sort of social mobility the Tories love – a tiny minority allowed to join their elite. Our ambition is so much greater. That’s why I’ll fiercely contest any moves by the Tory government to go down this road.”

Ms Powell told the conference that it was the “relentless mission” of her team to “hold the government to account on the issues where they are wholly failing”.