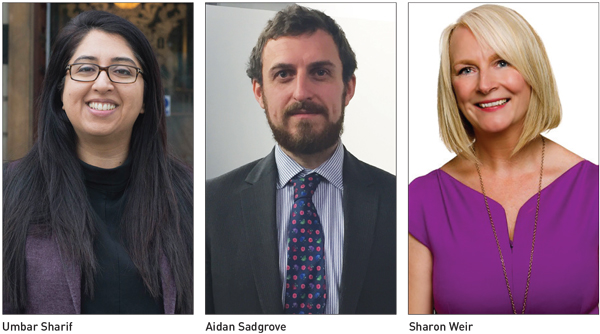 She was deputy headteacher at Highbury Grove School, north London, where she has worked for the past nine years.

Ms Sharif says she is a believer in “tailored training programmes for teachers, as well as self-evaluation systems and processes”, which she implemented at Highbury Grove and plans to use at Six Villages.

“Underpinning all the goals we have [raising and sustaining attainment and focusing on teaching and learning] is enabling others to lead and I think to achieve this self-evaluation is key.

“Where it has worked most successfully for me is where barriers have been broken down between staff and creating an authentic team. Building trust and a sense of community is important to me.”

Ms Sharif studied English and psychology at London South Bank University and then a PGCE at the Institute of Education.

She also volunteers as a trustee for Leyton Orient Charitable Trust, working to support the development of their educational programmes.

Aidan Sadgrove has been appointed founding principal of One Degree Academy, a new all-through school in north London.

He moves from neighbouring City of London Academy where he has been vice-principal for the past year.

Mr Sadgrove, who starts in his new role in January, says the “opportunity to build a school from the ground up is unique. I’m looking forward to that.

“Much of the frustration we feel in secondary schools is that you get pupils and think ‘if we had got them earlier we could have done a lot more to help them’ when they’re falling behind. So this being an all-through school is a bonus.”

Mr Sadgrove studied English literature at the University of Manchester before joining the Teach First and Future Leaders programmes.

Sharon Weir has been appointed principal of the Global Academy, a new university technical college (UTC) in north London developed by media and entertainment group, Global.

Opening in September, the UTC will provide academic and vocational training for 14 to 18-year-olds who want to work in digital broadcast media.

Ms Weir’s 30-year career started with a degree in education from the University of St Andrews and teaching in Scotland, to spending the past 13 years working in education in the US.

She says that Global will be “a new challenge. I’ve worked in charter schools in the US and the UTCs are a bit similar that we are offering students an alternate education in addition to regular state school.

“We are going to build the school as the first step into the digital broadcast media world for students, using all of the resources available.”