One in 20 teachers report having a long-lasting mental health problem, but teaching isn’t the only profession hit by an increase in issues with wellbeing, a new study has found.

Research by the UCL Institute of Education found around 5 per cent of teachers in England now say they suffer from a long-lasting mental health problem which has lasted or is likely to last for more than 12 months, up from 1 per cent in the 1990s.

However, the mental health of other professionals, such as nurses and accountants, has also deteriorated over the same period, and increases in reported mental health problems may be due to workers being more willing to talk about their issues or seek help.

The working paper, which was funded by the Nuffield Foundation, analysed data from more than 20,000 education professionals collected through the Labour Force Survey, Annual Population Survey and the Health Survey for England between 1992 and 2018.

It follows moves by the government to clamp down on teacher workload and ease stress, amid concerns about a growing crisis.

The annual Teacher Wellbeing Index found last year that over a third of education professionals (34 per cent) experienced a mental health issue in the last academic year, up from 31 per cent the year before.

Professor John Jerrim, the lead author of the paper, warned the teaching profession is “currently in the midst of a crisis and one potential reason why its struggling to recruit and retain enough teachers is due to the pressures of the job”. 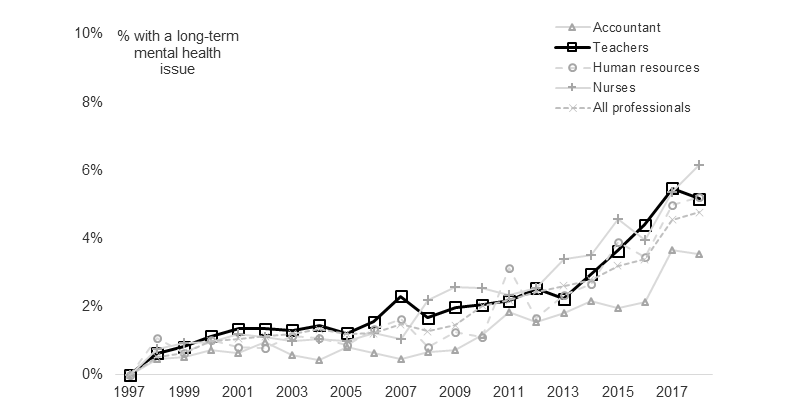 “It has long been known that teaching is a stressful and challenging career and we wanted to see if the mental health and wellbeing of teachers had improved or declined, especially in light of government promises to ease the burden upon the teaching profession,” he added.

Researchers say the increase in reports  could be due to teachers – like many other professional workers – “being more willing to talk about such issues and to seek help”.

This was consistent with a finding that there has been no increase or decrease in unhappiness, anxiety or feelings of low-self-worth among teachers in a decade.

“The results from our study may therefore not be as worrying as they first seem, if it means more teachers who are struggling with their mental health are now getting help,” said Jerrim. He called for more work to monitor and improve the mental wellbeing of the profession.

Dr Mary Bousted, joint general secretary of the NEU, said there was “no doubt that the excessive demands upon education staff and the poor working practices they endure in schools and colleges are helping create a toxic work environment, leading to mental ill-health among both teachers and support staff”.

“It is no wonder that we cannot recruit and retain the staff we so desperately need if workload demands are totally unsustainable. The challenge for the government is to address these issues and ensure that education staff are nurtured and supported in their role but there is currently little sign of any concrete action in this respect.”

A Department for Education spokesperson said the government was “already taking action in this area in order to strengthen work life balance and wellbeing for teachers”.