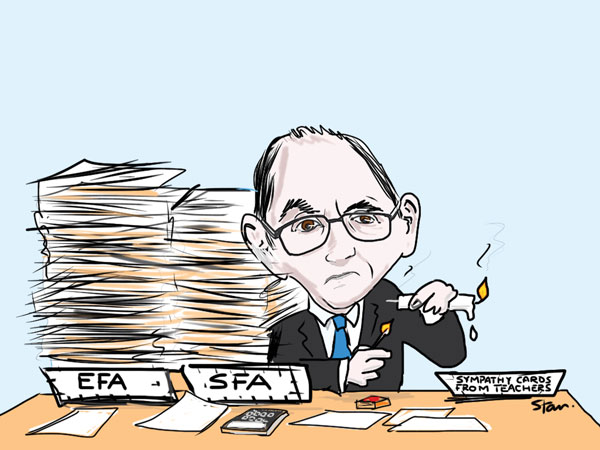 The government is to save a £142,000 chief executive salary by also giving the boss of the schools funding body oversight for adult further education.

The SFA currently employs around 925 staff and contracts with more than 1,000 colleges, private training organisations and employers, with more than £4 billion of funding each year.

He replaces Barbara Spicer, who had a nine-month contract with the Department for Business, Innovation and Skills, and stepped down in September.

The job was advertised by the government with a salary of £142,000 but a government spokesperson confirmed Mr Lauener will not receive a pay rise.

He currently earns up to £145,000 as chief executive of the EFA, which is overseen by the Department for Education (DfE).

Schools Week reported in September how the EFA now has a workforce of 951 people – an increase from 850 last year – and manages £54 billion a year to support all state-funded education for three-to-19-year-olds at schools, colleges and other training organisations.

The EFA is also required to consolidate academy trust accounts into financial statements, and is responsible for finding sites for new free schools.

But concerns have been raised about the appointment by Labour’s shadow education secretary Tristram Hunt.

The National Audit Office (NAO) published a report in January which said the EFA “faces increasing expectations from the DfE.”

Mr Hunt said: “The NAO has warned about the EFA becoming overloaded. And yet ministers respond by appointing its chief executive as the joint CEO of the Skills Funding Agency as well as the EFA.

“This will raise further questions about the ability of the EFA to fulfil its duties.”

A DfE spokesperson said: “Peter Lauener brings a wealth of experience in skills and working with employers to the SFA. In his new role he will be well placed to join up our programme of reform across the education and skills sector.

“Building on these links between the sectors will be a benefit to both and there will be a lot of common areas of work between the two roles. Peter also has a strong team of directors who take day-to-day responsibility of the EFA’s functions.”

Mr Lauener is to split his time 50/50 between the two departments. Both the EFA and SFA have offices in London and Coventry within a short distance from each other. A spokesperson said he would also work from “satellite offices” across the country.

A government statement said Mr Lauener would have separate accountability for each agency’s budget — and stressed the EFA and SFA would not be merged.

At the time of his announcement Mr Lauener said: “I am delighted to take on this role and looking forward to the challenge of making a difference in the skills sector.

“I have a long-standing interest and commitment to apprenticeships and skills and am keen to be involved in the next stage of reform.”