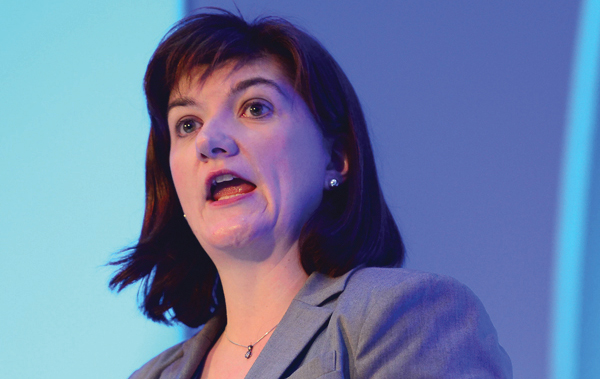 Nicky Morgan has this week unveiled a “landmark” education bill that paves the way for every failing school to become an academy.

But the education secretary repeatedly dodged questions on how many academies were failing, or what should be done about those. Schools Week analysis of the latest Ofsted inspection outcome data, from April, shows there are 133 academies rated as inadequate.

The new legislation proposed by Ms Morgan is intended to “sweep away bureaucratic and legal loopholes” so “the best education experts can intervene in poor schools from the first day we spot failure”.

Appearing on national media when the Education and Adoption Bill was unveiled on Wednesday, Ms Morgan said: “We think a day spent in a failing school is a day too long when their education is at stake.”

However, an investigation by Schools Week has discovered 28 schools that were good or outstanding when they first converted to academy status but have subsequently fallen into special measures. It means pupils in those schools have spent over 7,548 days in a failing academy, using Ms Morgan’s terms.

The 28 schools that fell from good or outstanding to inadequate after converting to academies. *Latest figures are up to April 1

Our analysis raises questions about the assertion that academies enable a “world class education” for more children.

Becky Francis, professor of education and social justice at King’s College London, said: “To suggest that academy sponsorship is a silver bullet in its own right clearly belies the evidence.

“The DfE needs to adopt a more measured approach and to undertake further, robust investigation of what supports the success of the most effective sponsor chains and local authorities.”

Our analysis, from the most recent Ofsted outcome data, covering inspections up to April 1, found that of the 1,953 mainstream academies rated as a good or outstanding in their previous Ofsted, 28 fell to being inadequate in their most recent (1.43 per cent).

The figure for local authority mainstream schools was marginally higher (1.57 per cent) with 127 schools now inadequate out of 8,071 formerly good or outstanding schoolsl.

But Jonathan Simons, head of the education at the right-leaning thinktank Policy Exchange, said drastic falls in Ofsted grades are usually caused by major events such as a change in pupil cohorts, heads leaving, an exodus of teachers or a financial crisis.

He said: “I don’t think it casts doubt on the wider issues of whether academies in general are a good improvement mechanism.

“My argument has been that academy status, especially in chains, provides schools with greater capacity and capability strength in both leadership and teaching, which is what makes the difference.”

The new proposals could lead to the rapid conversion of up to 1,000 schools over the next five years – on the assumption that schools continue to fail at the same rate as present.

Ms Morgan said the focus will be on changing schools “often left languishing in special measures” into academies.

But our analysis shows eight convertor academies have been in special measures since 2013. All eight remain with their original sponsor.

The longest is Sir John Gleed School, in Spalding, Lincolnshire, which has been rated inadequate since April 2013. Since then it has had five section 8 inspections and an Ofsted inspection, published last month, which found it was still inadequate.

However Mr Simons said: “There are quite a few inadequate schools in the maintained sector that sit there for a long time before action is taken, whereas the Department for Education does take action on under-performing chains more rapidly.”

He highlighted the E-ACT academy chain which lost ten of its schools after the DfE intervened amid performance concerns.

Ms Morgan also reiterated that academy sponsors have turned around the fortunes of many schools. She added: “This bill will allow them to do their job faster and more effectively, ensuring that thousands more pupils, from across the country, get the world class education they deserve.”

Where we have concerns about an academy trust’s ability to improve performance, we will intervene to find a strong sponsor for the school.