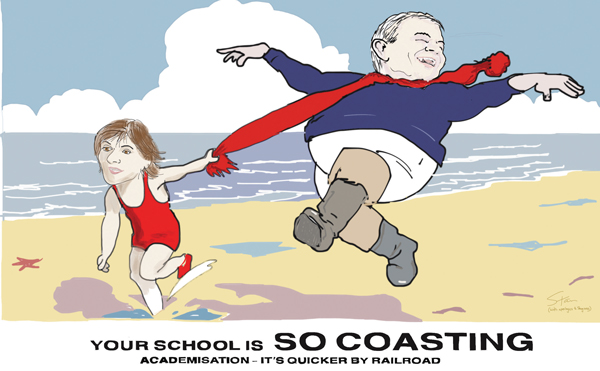 New legislation will oblige the governors of schools facing forced academy conversion to support the government’s choice of sponsor, in what has been dubbed “an extraordinary attack on basic freedom of speech”.

Clause 10 of the Education and Adoption Bill 2015, tabled in the House of Commons on Wednesday, requires governors to take “all reasonable steps” to facilitate academy arrangements with a sponsor that has been selected by the education secretary.

The government has said the bill will prevent campaigners from “delaying or overruling” the academisation process and has claimed that it will turn around 1,000 failing schools over the course of the next Parliament.

But Henry Stewart, co-founder of the Local Schools Network, described clause 10 as “totally outrageous”, adding: “It is saying that governors no longer have a duty of care to their children and instead have a duty to implement government policy.”

“It’s an extraordinary attack on basic freedom of speech, and I think governors across the country will be outraged by it.”

If the bill is approved, clause 10 will amend the 2010 Academies Act and force the governors, plus the relevant local authority, of any school facing an academy order due to low performance to “work towards the school’s successful conversion” by “taking all reasonable steps necessary to that end”. On top of this comes the requirement to accept the government’s choice of sponsor.

The legislation does require consultation with trustees, the appointer of the founding governors and any relevant religious organisation. Other current consultation requirements are swept away.

‘Coasting’ schools, a topic mentioned by education secretary Nicky Morgan throughout the recent general election campaign, also feature in the bill. It amends the Education and inspections Act 2006 and creates a new category of school eligible for intervention and potential forced academy conversion.

The bill fails to define the indicators of a “coasting” school, but does say that the Secretary of State will define the term “by regulations”.

Education policy consultant John Fowler told Schools Week that a definition of “coasting schools” would have to be made by statutory instrument, a piece of secondary legislation laid before both houses of parliament.

But he also said it would be “incredibly challenging” to define the category purely based on progress data – as Ms Morgan has previously hinted.

Fowler said: “She will have to [define] it in very precise regulation which isn’t easy to do without using something like Ofsted. The benefit of using Ofsted, of course, is that Her Majesty’s Chief Inspector is a statutory body.

“The worrying thing will be if they fudge it in the regulations and pass it back to [being] a so-called ‘political judgement’.”

The bill will have its second reading on June 22 and a public consultation is expected to take place over the summer.