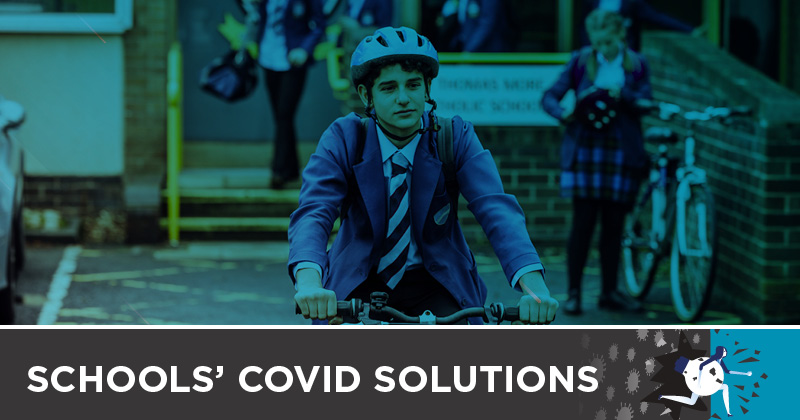 Headteachers say that Covid-driven changes to the traditional school day – such as staggered break times and longer lessons – have halted playground clashes and reduced low-level disruption.

A major challenge for schools has been how to implement bubbles of pupils, aimed at reducing transmission between classrooms.

To help with catch-up and minimise the movement of students this term, Manor High School in Leicestershire has introduced all-day, single-subject lessons in a 50-day timetable (instead of a fortnight).

Misbehaviour has since improved dramatically, from 1,296 behaviour points in September 2019, to 349 this year.

Liam Powell, the school’s headteacher, said: “I always say Covid is a bit like a war. And in wars you have horrible things happening, terrible things, but you also get innovation through necessity.”

A survey of students, parents and staff earlier in the term found that 46 per cent either strongly agreed or agreed that they would like the single-subject day to continue after the first 50 days were up.

Another 35 per cent either disagreed or strongly disagreed, while 19 per cent nor agreed or disagreed. Some changes were made, such as the spacing of lessons, The second round finishes in February.

Post-Covid, the school is looking at a possible hybrid model, where teachers could request longer lessons over three periods.

Robin Bevan, the head, said: “You do have to be attentive to what people would refer to as retention and recall, you do need to make sure that when you start your next lesson you bring back to mind in the class the things they were doing in the last lesson.

“But the contrast is, in the two-and-a-half hour lesson, students are getting much more depth. So they tend to come out of those lessons with deeper understanding of whatever they’ve been introduced to.”

He said it had also reduced the number of teachers having to self-isolate, had benefited autistic children and had made pupils’ school bags lighter.

While there could be large gaps between subjects – for instance PHSE and citizenship could be once every five weeks, but maths up to twice a week – early indications were that teachers, pupils and parents would like the school to keep this for next academic year.

Pupils had to stay in their year groups, which meant there were 60 fewer children on the playground. He said the school might keep this for the winter, when children played on the netball courts rather than the field.

But he said there were some drawbacks. “Things like our year 5s would normally be playing with reception… and organise games for them. We are not able to do that. So hopefully by summer we can bring that back.”

At Scholars Academy Trust, which has two primary schools in Leicestershire, there have been fewer “clashes” between pupils who now played in year groups. Lunchtime staff have also built closer relationships with the children.

Inderjit Sandhu, the trust’s executive head, said low-level disruption at lunchtimes had diminished. “It also highlights the need for children to have personal space both in and out of the classroom.”