The attainment gap between primary pupils has widened by up 52 per cent during school closures, the first data published on lockdown learning losses has suggested.

A new study by the Data Evaluation and Learning for Viral Epidemics (DELVE) group, which advises government scientists, has revealed for the first time the impact of lockdown on pupils’ attainment.

It includes a study showing the achievement gap between the top and lowest-performing pupils in year 3 widened by 52 per cent after lockdown.

The report also warns of the potential impact on the 13 year groups affected by lockdown should action not be taken.

Researchers estimate that around a quarter of the entire workforce could have lower skills for 50 years following the mid-2030s. This could reduce their earnings potential by three per cent a year and lower the overall economic growth rate, the report found.

Professor Simon Burgess, professor of economics at the University of Bristol and a lead author on the report, said: “We know how damaging it is for children to miss out on school. The amount of school already missed due to the pandemic could impact on their earning potential by around 3% a year throughout their lives and impact on productivity in the UK for decades.”

The report, titled Balancing the risks of pupils returning to schools, calls for keeping schools open to be the “default policy” of government.

The group, made up of researchers brought together by the Royal Society, has put forward detailed proposals for how this could work, including a local coronavirus alert system for schools (read the full proposals here).

But the findings on the learning already lost because of the closures makes for sobering reading.

An analysis of thousands of pupils’ scores on Star reading and understanding tests, completed via online learning platform Renaissance Learning, before and after lockdown suggest primary pupils have been worst hit.

At year 5, the rise was 39 per cent. The impact for secondary pupils wasn’t as drastic, but the achievement gap among pupils in both year 7 and 9 still grew by 13 per cent. 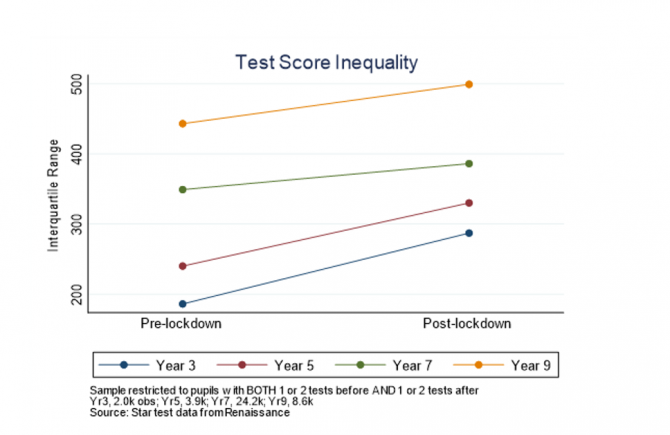 The report concluded the outlook “fits well with the increased inequality seen in learning inputs over the lockdown period, and is concerning for the future learning outcomes for these cohorts and their life chances beyond education”.

Most pupils have lost around 12 weeks of face-to-face learning because of the coronavirus pandemic.

Professor Anna Vignoles from the University of Cambridge, who also led on the report, added: “Shutting down schools has impacted all children but the worst effects will be felt by those from lower socio-economic groups and with other vulnerabilities, such as a pre-existing mental health condition.

“Children from low income households in particular are more likely to lack the resources (space, equipment, home support) to engage fully with remote schooling… This has to be taken into account in how we come out of this pandemic.”

But the report highlighted a lack of data hindering understanding of the risks posed by coronavirus, adding a system should be put in place to provide regional decision-makers with local and timely data to monitor neighbourhood and school infection rates.

However the report states the government’s Surveillance in KIDs (sKID) programme, run by Public Health England, won’t be able to conclusively show the difference in risk of attending school as the sample size is too low given the current prevalence of the virus in the UK.

The study aims to test staff and pupils at 100 schools this summer.

The report said responsive testing and detailed case study analysis of test results from schools which have experienced an infection may be a more feasible approach to understanding transmission in schools.

They also call for lessons to learnt from what other countries are doing, adding that, in general, the opening of schools has not resulted in a “notable rises in infection at a national level”. 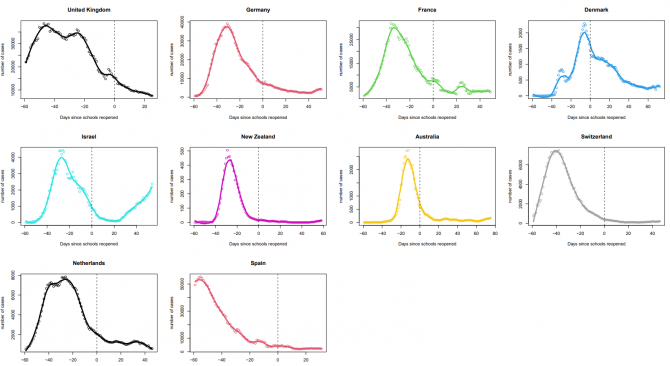 The report also called for new tests to be taken in September and at the end of the year to measure the “scale of the learning loss from school lockdown”.

But the report adds: “The burden on schools now and more so in September will be large, so we also recommend that these tests be carried out on an anonymous sample of schools, rather than be universal.”

A Department for Education spokesperson said: “Nothing can replace being in the classroom, which is why we have published guidance to ensure all children can return to school in September.”

They added extra cash from the £1 billion covid catch-up fund will “help all children to make up the impact lost time in school has had on their education”.