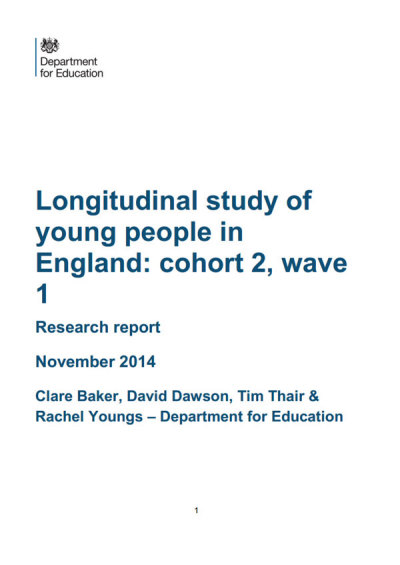 Fewer teenagers were bullied last year than in 2004, suggest figures published by the Department for Education (DfE) to mark Anti-Bullying Week.

Forty per cent of year 9 students, however, still said they experienced some form of bullying in the previous 12 months, and the research concluded that “for a significant minority of young people, bullying was a regular problem”.

The figures, from two longitudinal studies of young people in England, showed a drop in the proportion of children who said they had been bullied in the previous year, from 45 per cent in 2004 to 40 per cent in 2013.

The research asked year 9 students whether they had experienced any of five forms of bullying in the last year: name-calling; social exclusion by peers; being made to hand over money or possessions; threats of violence; and violence.

The proportion who said they had suffered violent bullying also dropped during the same period, from 18 to 13 per cent.

Young people with a statement of special educational needs (SEN) were more likely to say that they had experienced all forms of bullying than non-SEN pupils.

Commenting on the release of the statistics, Education Secretary Nicky Morgan said: “No child should have to suffer the fear and victimisation of bullying. Today’s figures show that our teachers, parents and charities have made great strides in reducing bullying, which I know is the number one concern of many parents.

“But even one child bullied is one too many, so I am calling on all teachers, charities and parents to continue this moral mission and reduce bullying further.”

The statistics come from first cohorts of the two studies. The first was carried out by the Institute of Education, the second by the DfE. A total of 28,800 children were interviewed.

A spokesperson for ChildLine said that bullying remained a top concern for young people, but experiences had changed.

“The experiences children and young people talk about with regards to bullying has seen a shift from more traditional face-to-face bullying to online bullying. Not only are they being targeted at school, but often the name-calling follows them home via their social media accounts.”