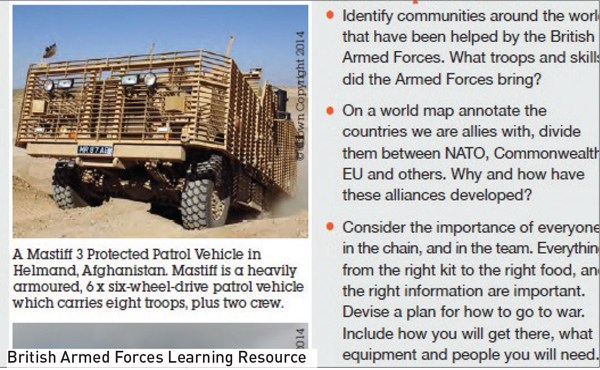 A government-issued teaching resource which includes a task asking pupils to devise a plan for going to war, is presenting a “sanitised” and “positive” view of life in the armed forces, claims a prominent educationalist and citizenship expert.

In a report joint-issued by campaign groups ForcesWatch and Quakers in Britain about the ‘British Armed Forces Learning Resource’, Don Rowe, a former director of curriculum resources at the Citizenship Foundation accused the government of trying to boost recruitment through a “biased” piece of literature.

The learning resource was issued last September, having been commissioned by the office of the prime minister with the support of the Department for Education (DfE) and Ministry of Defence (MoD).

Mr Rowe said: “Its aims, judging from the text, appear to be to present a positive, sometimes sanitised, view of the armed forces, to boost recruitment, and advocate for more combined cadet forces in schools.

“These aims are entirely consistent with the government’s current strategy to promote a ‘military ethos in schools’.”

He further claimed that two government ministries, the MoD and the DfE, collaborated with the prime minister’s office to produce the resource. The resource shows the logo of all departments.

Mr Rowe continued: “I believe this is completely unacceptable, and that the document should be withdrawn and redeveloped in such a way that students can be enabled to learn about the role of the military in our society and in national and international affairs in a way which is educationally-sound, balanced, and which respects the rights to freedom of belief of students and their families.”

The resource pack includes a foreword by prime minister David Cameron, five chapters of information about the armed forces, and a series of suggested activities.

Among those are several balanced tasks, such as having a class decide common values or debating different views on conscription.

However, one suggested activity stated: “Devise a plan for how to go to war. Include how you will get there, what equipment and people you will need.”

Owen Everett, from ForcesWatch, said: “We consider that the document amounts to political interference in children’s education and that the DfE is failing in its legal duty, under the 1996 Education Act to safeguard education from politicisation.”

Brian Lightman, general secretary of the Association of School and College Leaders, said: “It is important that young people understand what the armed forces exist for and also engage with controversial topics like conscription, nuclear warfare and pacifism.

“It is equally important that they are taught to read materials critically and are taught without political bias. Schools are well aware of this responsibility and make use of published learning resources judiciously and responsibly.”

A DfE spokesperson said: “Resources are regularly produced for teachers to help them come up with lesson plans that stimulate debate and discussion and many schools welcome these materials.

“It is then rightly for teachers to decide what is best for their pupils and what materials they wish to use during lessons.”

The MoD and the prime minister’s office would not comment as the DfE were leading on the matter.