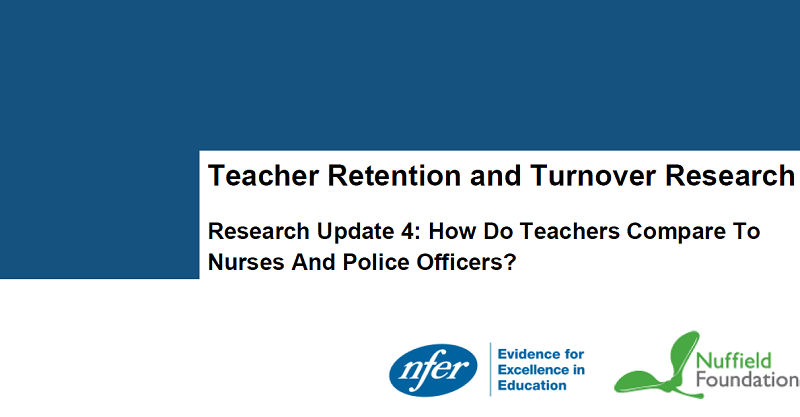 Most teachers remain happy with their income, despite a real-terms drop in pay and longer working hours in recent years, new research has found.

A new report by the National Foundation for Educational Research found 79 per cent of teachers said they were satisfied with their income in 2015-16, even though teachers’ average hourly pay has decreased by 15 per cent in real terms since 2009-10.

The report, the fourth in NFER’s teacher retention and turnover research series, compared teachers’ experience to that of nurses and police officers.

It found that 78 per cent of full-time teachers are satisfied with their jobs, slightly lower than nurses (81 per cent) but much higher than police officers (67 per cent).

Nurses and police officers are generally less satisfied with their income than teachers, at 68 per cent and 70 per cent respectively.

However, teachers had the lowest rate of satisfaction with their amount of free time, at just 47 per cent compared to 60 per cent for nurses and 58 per cent for police officers.

Teachers work so much during their free time that even if the relatively long holidays they receive are taken into account, they still work 45 hours a week on average throughout the year.

The findings back up recent research by the Department for Education, which found that some teachers are being forced to go part-time in order to manage their heavy workload, and previous NFER research which found that teachers are willing to take a 10-per-cent pay cut to leave the profession and allow themselves more free time in another job.

NFER calculated that teachers have a real average hourly pay rate of £17.70 per hour, about the same rate as nurses, but less than police officers at £18.80.

Geoff Barton, the general secretary of ASCL, described the research as “further evidence that many teachers are overloaded and underpaid”.

“Unsurprisingly, we are failing to attract enough teachers into the profession and then losing too many early in their careers,” he said.

“Teaching has always been a demanding job, but relentless government reforms, underfunding and ever increasing expectations on schools have driven up workload to an intolerable degree.”

Ministers must “commit to fully funding a decent pay rise for teachers”.

Despite relatively strong job and income satisfaction rates, teachers are more likely to leave their profession than nurses or police officers (12.3 per cent each year, compared to 9.9 per cent and 7.6 per cent respectively).

Working “a large amount of additional hours to keep up with the demands of the job” is a likely to be an important factor in teachers choosing to leave their jobs.

“We recommend that further work to reduce the working hours of teachers should be a priority for school leaders and the government,” said NFER’s boss Carole Willis.