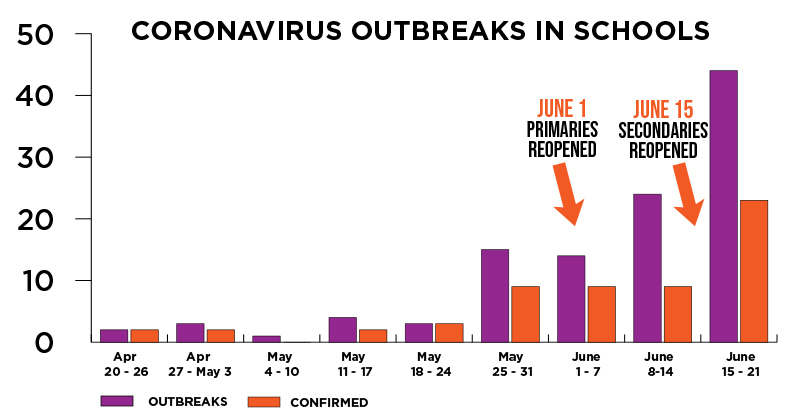 PHE’s weekly COVID-19 surveillance report, published today, shows the number of “acute respiratory outbreaks” in schools rose from 24 to 44 – 16 more outbreaks than were recorded at hospitals.

Last week, secondary schools started to welcome back some pupils in year 10 and 12. It was also the third week primary schools reopened to more pupils.

While the PHE report stated the rise “coincides with wider school reopening”, they pointed out it also follows an “expansion of testing and contract tracing”.

The 44 cases last week mark a sharp rise since schools reopened. In the week starting June 1, there were 14 acute respiratory outbreaks, then 24 in the following week.

Barring the week before schools opened, the number of suspected outbreaks did not rise above four.

Of the 44 outbreaks recorded last week, 23 tested positive, up from 12 confirmed cases in the previous week.

Overall, the number of new acute respiratory outbreaks rose from 199 to 223. It means schools made up nearly 20 per cent of the outbreaks last week, compared to 12 per cent in the previous week.

Dr Joshua Moon, a research fellow at the Science Policy Research Unit (SPRU), previously told Schools Week: “I would be fairly confident the opening of schools has increased transmission within schools, but that is also what you would expect – the question is whether or not you can jump on that and get it under control.”

The Leicester Mercury reported earlier this week that five schools in the city had to close following confirmed coronavirus cases.