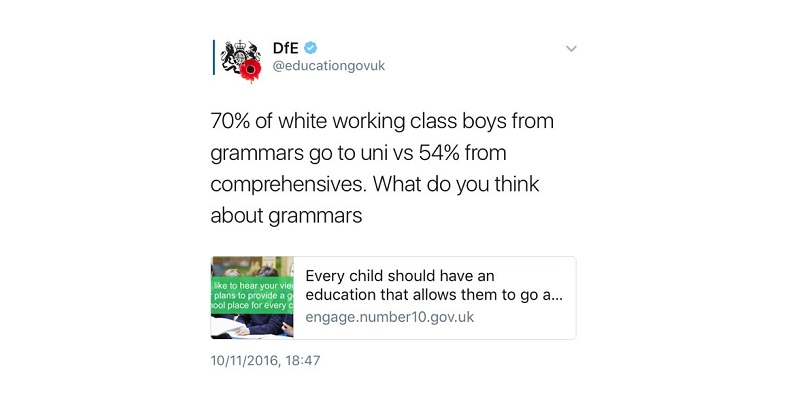 The government statistics watchdog has criticised a tweet from the Department for Education that claimed “white working class boys” performed better in grammar schools than in comprehensives.

Ed Humpherson, the director general for regulation at the UK Statistics Authority, has written to Jonathan Slater, the DfE’s permanent secretary, over a tweet which he said had falsely labelled white male pupils on free school meals as “white working class” pupils – and failed to recognise that selection within grammar schools meant they could not fairly be compared to comprehensives.

The tweet, which has since been deleted, was posted on the DfE’s Twitter profile yesterday (November 10) with a rhetorical question on the end:

“70 per cent of white working class boys from grammars go to uni versus 54 per cent from comprehensives. What do you think about grammars?” Humpherson said the UK Statistics Authority had been made aware of “concerns” about the tweet, and a subsequent review of its contents had revealed two “misrepresentations”.

“As was made clear in the answer to a Written Parliamentary Question from Royston Smith MP that was published on November 22, DfE does not collect ‘information on pupils’ socioeconomic status or whether they would be identified as working class’.

“Instead, the statistics quoted were about white male students who were eligible for free school meals in year 11.”

The tweet also falsely implied that comprehensives and grammar schools had pupils of similar academic ability and so could compared on university acceptance rates, the letter said.

“It is also in the nature of grammar schools that they are selective, unlike most comprehensive schools, and the tweet is therefore not making a like for like comparison between the two types of school.”

The UK Statistics Authority was “disappointed” that the DfE had chosen to publish the tweet in such a form, said Humpherson.

He encouraged the department to continue to seek “sign-off” from Iain Bell, the department’s director for data and education standards analysis, before publishing.

“I understand that in this case the statistical team was not consulted before the message was tweeted, which was unfortunate. I would therefore like to ask for an update from you on how you will avoid the recurrence of such misleading communications.”

A DfE spokesperson said: “Some text was tweeted in error and was subsequently taken down”.