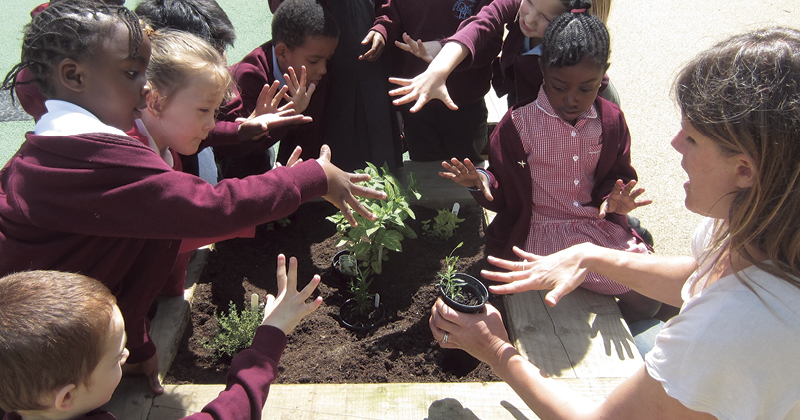 Stamford Hill primary school in Tottenham, north London, has installed an edible playground as part of a countrywide initiative to combat childhood obesity.

Raised beds will be installed for salads and root vegetables, fruit trees established and compost areas set up. The aim is to educate children about where their food comes from, with planting and harvesting workshops held throughout the year.

Support from the People’s Postcode Lottery has enabled Trees for Cities, the charity behind the scheme, to set up edible playgrounds in primary schools across London, Reading, Manchester, Leeds and Birmingham.

The first edible playground was created in 2003, and there are now more than 30 in the UK, with plans to roll out 40 more over the next three years.

Stamford Hill is one of 10 schools that will act as flagship projects, chosen because of their location in cities with high levels of childhood obesity and food poverty.

Kathy O’Sullivan, the school’s headteacher, said: “As part of our ongoing work on healthy eating we have installed a kitchen and employed our own cook. A cooking room is also being installed so we can develop the cooking curriculum across the school.

“We are keen to extend our work on healthy schools . . . growing our food felt like the next logical step.”

On average, installing an edible playground costs about £30,000, which covers everything from the initial design, construction, educational support and project management.

David Elliott, chief executive at Trees for Cities, said: “Our edible playgrounds programme addresses several key areas of concern around children’s health. They teach pupils where food comes from, that healthy food can be the easy choice, in and out of school, and encourage physical activity.”