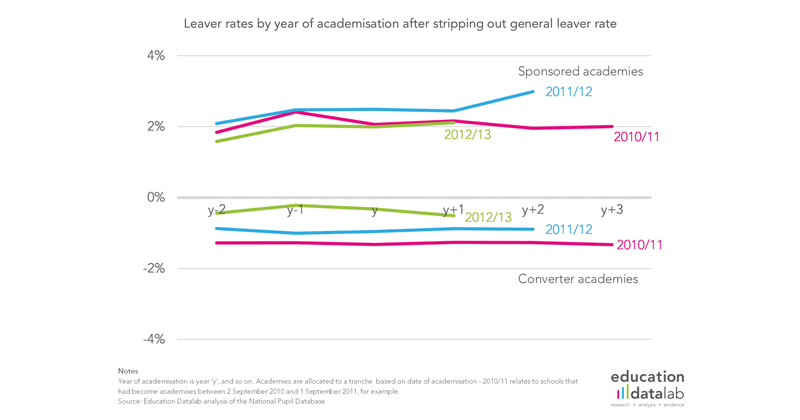 More pupils leave schools when they become sponsored academies than when they are under local authority control, a new report has shown.

Researchers at Education Datalab analysed up to three years of data for 149 schools. Among those that became sponsored academies in 2010-11, the rate of pupils leaving – to other schools, alternative provision, exclusions or from the education system entirely – rose from 4.8 per cent before academisation to 5.4 per cent afterwards.

That rise was steeper in 2011-12, with pupils leaving at an average rate of 6.4 per cent after academisation, up from 5.1 per cent. “No such trend was apparent for converter academies,” the report says.

Education experts say the findings show the effect of “perverse incentives” placed on schools to prove that academy sponsorship is boosting outcomes.

Most pupils who left a secondary school did so in the first three years, the report suggested, while a previous Education Datalab report has shown that pupils who received free school meals were also more likely to move and less likely to achieve five good GCSEs thereafter.

“Whereas with a five A-C measure, there’s a limited amount of damage [one pupil] can do to a school’s performance, if you have a pupil who starts bombing at secondary the impact on your Progress 8 will be huge.”

He said the findings were another example of sponsored academies using methods to increase their grades to “prove that sponsorship has made a difference”.

“The pressure is greater than for a standalone academy or local authority school.”

Education Datalab recalculated the GCSE results of sponsored academies so that all former pupils were included in the results, rather than just those still in year 11.

When only those on roll by year 11 were included, sponsored academies had a 46.3 per cent pass rate for five GCSEs at A* to C.

This dropped by 2.1 percentage points when pupils who left the school were included – a significantly higher change than for converter academies, which only saw a 1.5 percentage point difference.

The recalculated results reduced the pass rate of Harris Academy Greenwich in London by 15 per cent for the cohort taking exams in 2011.

In the past four years, 217 pupils have left the school before the January of their final year.

A spokesperson for the Harris Federation said the high mobility of pupils in London explained the churn, with parents dismayed when schools received an initial “special measures” judgment before the trust took over.

They said low-ability pupils at Harris had an above-average Progress 8 measure of +0.77.