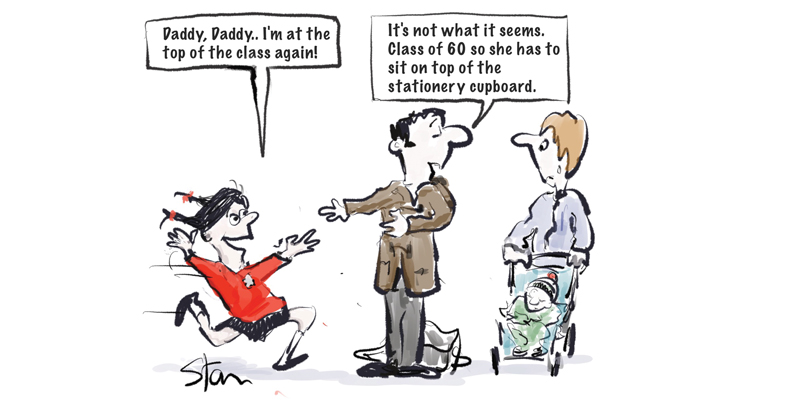 Super-size classes of 60 pupils with a single experienced teacher will be piloted next year by one of the country’s leading teacher training schools.

South Farnham school in Surrey will employ a teacher on a starting salary of £45,000, plus two newly-qualified teachers and two teaching assistants, to run the classes. South Farnham is an academy with more than 750 pupils aged from 4 to 11.

The plan is the brainchild of Sir Andrew Carter, the school’s head and author of a major review into initial teacher training.

Carter says the new model, which will initially run for 12 months, will allow would-be teachers to flourish. It will also enable South Farnham to produce more teachers, some of whom could be “loaned out” to other schools in its region.

Speaking to Schools Week, Carter said: “We have got to go away from the term ‘unqualified teachers’. Some people have 20 years’ experience – it’s inappropriate to say they aren’t qualified.

He said the classroom assistants would want to become newly-qualified teachers. “I can have two people in their training year and two who are one year below that – this means teaching assistants are getting experience.”

And 60 pupils would be getting five committed individuals at a ratio of 1:12, he said.

“This is much better than the traditional 30 [pupils] in class [per one teacher], where the teaching assistants don’t engage with practices.”

Research released this week by the Independent Schools Council shows the average staff to pupil ratio in state schools is 17:1, compared with 8.1:1 in private schools.

But unions have been critical of Carter’s plan. Mary Bousted, general secretary of the Association of Teachers and Lecturers, said it was nothing more than a “super-wizard management wheeze” that seemed like an “easy way to deal with the recruitment crisis”.

She also questioned unqualified teachers being given “inappropriate levels of responsibilities for which they won’t be paid”.

Christine Blower, general secretary of the National Union of Teachers, added: “Super-size classes are nothing more than a cost-saving exercise.

“They are certainly not about improving education; parents at this teaching school will certainly be alarmed at the proposals.”

But Carter insisted that it was not a scheme to save money but was about “teachers in our system.

“If a good teacher trained one teacher a year, we would have a surplus.”

Carter was knighted for his services to education in 2014 and is known to be a strong believer that the best schools should be working with others to spread excellence.

His school was recently listed in the top ten training schools in the country by the Good Teacher Training Guide. It also has school-centred initial teacher training (SCITT).

Carter said his proposals would help the school to share teachers across its region. “We have four extra teachers for September. We looked at the football model, and we are putting our teachers out on loan.”

He said lots of schools approached his SCITT in June and July looking for teachers. “The teachers will stay on our books, all you have to do is pay them a salary.

“These teachers go into these schools and get a good experience. And you can call them back if you need them.”

Figures released by the Labour party in January revealed that the number of children being taught in super-size classes in primaries – larger than 30 – had risen to more than 500,000.