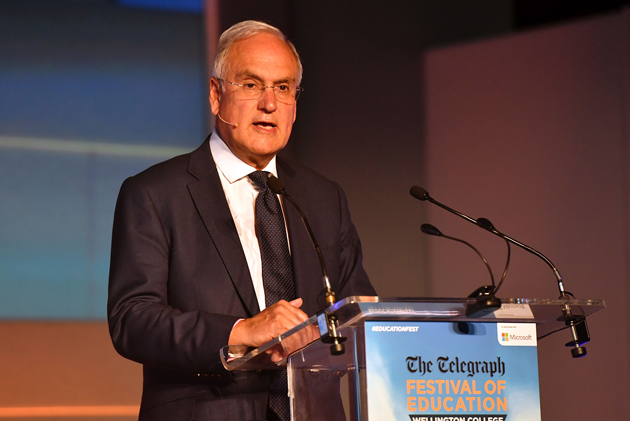 Sir Michael Wilshaw has graded his time at the helm of the education watchdog as “Ofsted outstanding”.

Speaking to Schools Week after his talk today at the Festival of Education, Wilshaw was asked how he would rate his time in office using Ofsted grades.

To which he replied: “Ofsted outstanding, obviously.”

Wilshaw was speaking after an impassioned speech at Wellington College today – one of his last before the stands down later this year – where he said the poorest pupils are still being let down.

Answering questions after his speech, Wilshaw attempted to explain why he believed the attainment gap was not closing.

He said: “As a headteacher, you’re going to get a decent Ofsted, probably, if overall your scores are pretty good – if you get over various thresholds.

“Inspectors ask, ‘but what are you doing for your poor children?’, and heads will say ‘yes, we know that’s a target for us in the future’.

“They are then left alone for the next five years. Blame us if you like for not failing schools that don’t do well by their poorest children, but then we would have 60 to 70 per cent of schools that are less good in the country – and what message would that give?”

He said Ofsted’s new shorter inspection framework could fix this, adding: “I hope my successor focuses on it in the way I did and the new inspector is tough on those schools that consistently underperform poor kids.”

When asked about the merits of a peer-review system, instead of Ofsted, Wilshaw said: “Ofsted is a key driver for school improvement.

“I wish I could say that a less accountability system would work, but I don’t think it would. Ofsted has enormously driven improvement… Peer review might be 100 years away but it’s not going to be around in the next few years in my view.”

Wilshaw started his speech in unusually repenting mood, saying “if I have stirred up emotions … and caused offence by speaking bluntly, then I apologise”.

But he later highlighted the continued plight of poor pupils.

He said there are five main culprits; the political ideologues of the Left and Right; those who argue children do not need structure in school; a constricting curriculum for youngsters who favour apprenticeships; poor teaching; and poor leadership.

He finished his speech: “As I begin my last few months as chief inspector, it saddens me immeasurably to say frankly that we are still letting down our poorest children and that if things do not change fundamentally, we will continue to do so.”