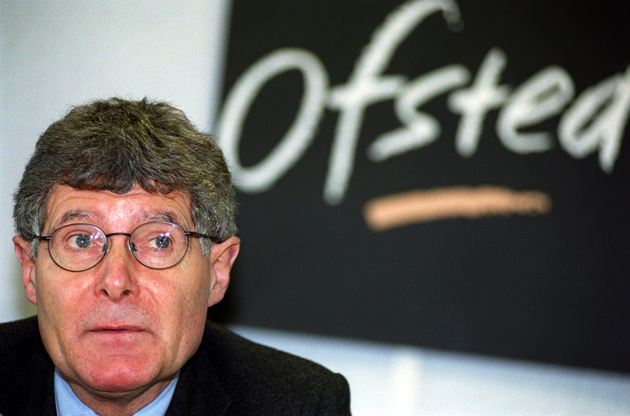 Former chief inspector of schools Sir Chris Woodhead, who was diagnosed with motor neurone disease in 2006, has died.

The 68-year-old was top of the schools watchdog for six years until his resignation in 2000. He was knighted for services to education in 2011.

He was known for making controversial remarks, including once claiming there were 15,000 incompetent teachers.

In February, Sir Chris told the Shropshire Star he had been diagnosed with cancer, which had spread to his liver.

Talking to Schools Week in April about his relationship with Sir Chris, former education secretary David Blunkett said: “I think it was like two stags locking horns, really – 95 per cent of what Chris Woodhead believed, I was up for. The problem for Chris, God bless him, is that unless you agreed with him 100 per cent, you were offside.”

He added: “I think there was a great deal that he contributed that he probably won’t be remembered for and should be.”

Today, Mr Blunkett added: “His latter years had been a demonstration of bravery and tenacity in living with motoneurone disease and he should be remembered as one of the strong characters of the education world of the last 30 years.”

Current Ofsted chief inspector Sir Michael Wilshaw said: “As a headteacher in the early 90s, when Sir Chris Woodhead was chief inspector, I greatly appreciated the courage and bravery he showed in confronting a complacent education establishment.

“He said the uncomfortable things that needed to be said and was tireless in his ambition for schools to be the best they could be. My thoughts are with his family and friends at this time.”

NAHT general secretary Russell Hobby said: “NAHT is very sad to hear the news that Sir Chris Woodhead has died. The thoughts of our members are with his friend and family. Without doubt, Sir Chris was a significant force in education for many years.”

Brian Lightman, General Secretary of the Association of School and College Leaders, said: “We are sad to hear of the death of Sir Chris Woodhead. He was a controversial figure, with forthright views, and his time as chief inspector of schools frequently brought him into conflict with the teaching profession. That, however, is in the past, and our thoughts today are with his family to whom we extend our sympathies.”

Education secretary Nicky Morgan said: “I am saddened to hear about the tragic death of Chris Woodhead, who was an immense figure in the world of education.

“His determination to ensure that every child had the best education possible raised aspirations and changed lives. He was someone unafraid to speak his mind or challenge established orthodoxies and our education system is the better for it. My thoughts are with his family and friends at this sad time.”

Chris Woodhead started a crucial debate on school standards and reform. Meetings with him were never dull. My thoughts are with his family.

Sir Chris was chairman of Cognita, a company which runs a number of independent schools, from 2004 to 2013.