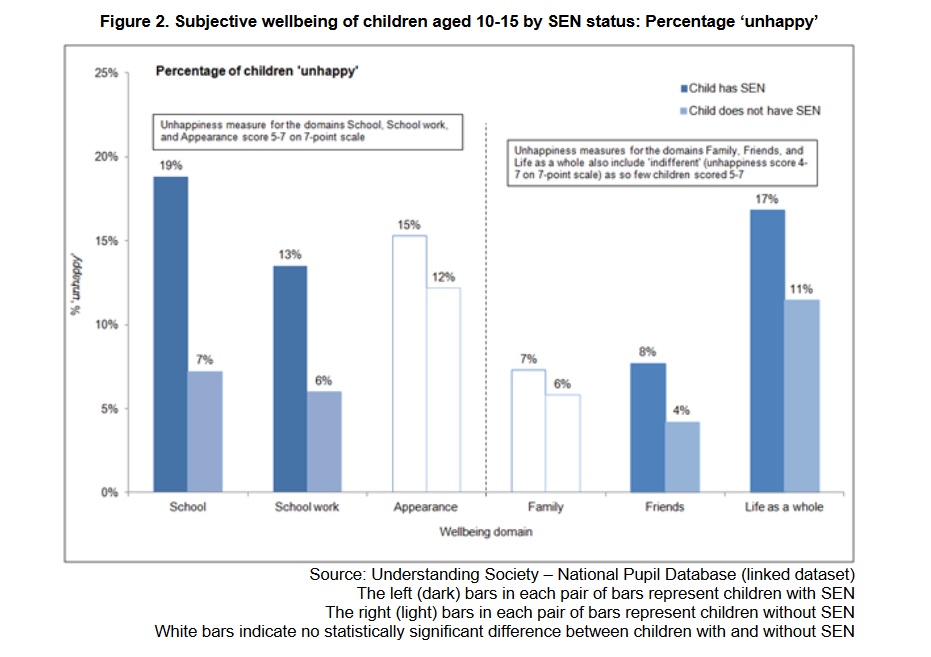 Secondary pupils with special educational needs (SEN) are more likely to be unhappy at school than their peers, a new wellbeing study has found.

The research, commissioned by the Department for Education and published today, also found that SEN pupils were more likely to have psychological difficulties, including hyperactivity and inactivity, conduct problems, and were more at risk of mental health problems.

A separate report, also published today, meanwhile identified “a number of barriers” for schools providing the most effective support for SEN pupils.

It surveyed schools and colleges, finding problems with the availability of good support staff and outside professionals, and difficulties in meeting the needs of SEN pupils within a classroom setting.

The survey also found a “lack of clarity” surrounding who should be responsible for identifying SEN across schools and colleges.

The DfE said it commissioned the wellbeing study to “fill the research gap” around the happiness of children with SEN at school. The study analysed data from a sample of 1,600 children, 299 of which had SEN.

It found higher proportions of SEN pupils were deemed to be “unhappy” when talking about their school, their school work and their friends.

Almost 20 per cent of children with SEN reported they were unhappy with their school, compared with just seven per cent without SEN.

Children were asked to rate their satisfaction with various aspects of their lives.

However SEN pupils show little difference to their peers when talking about their family and their appearance, the report found.

“Clearly, there is evidence that how children think about their wellbeing in relation to school is an issue for a number of children with SEN,” the report said.

“Given that having SEN means a child requires additional support at school, it is perhaps unsurprising that the biggest difference between children with SEN and without SEN is for their views on their school work.”

But the report found the link between SEN pupils and wellbeing was even stronger for psychological wellbeing – with SEN youngsters scoring higher than their peers across a range of areas.

The information was collected using a behavioural screening questionnaire.

However researchers admitted caveats to their findings, for instance that they may mask distinct wellbeing of children with different types of SEN. Only a small number of SEN pupils were included in the analysis, and the study only looked at children’s wellbeing at one point in time.

The social background of SEN pupils – more likely to be boys, from more disadvantaged families, and to be bullied – can impact on their wellbeing, but their distinct experiences “inside and outside the educational system raise pressing issues for policy and research”.

The study recommended further longitudinal research to explore the wellbeing of SEN pupils.

Meanwhile the survey of schools and colleges, which was compiled by Coventry University, found that many schools did not have access to outside professionals, and experienced difficulty when matching programmes to students’ needs.

The majority of schools reported that teaching assistants provided support for SEN pupils, both in and outside the classroom, usually through intervention groups.

However class teachers reported that they had a lack of time to plan together with TAs to plan lessons – making “continuity of support difficult”.

The survey had 219 responses.