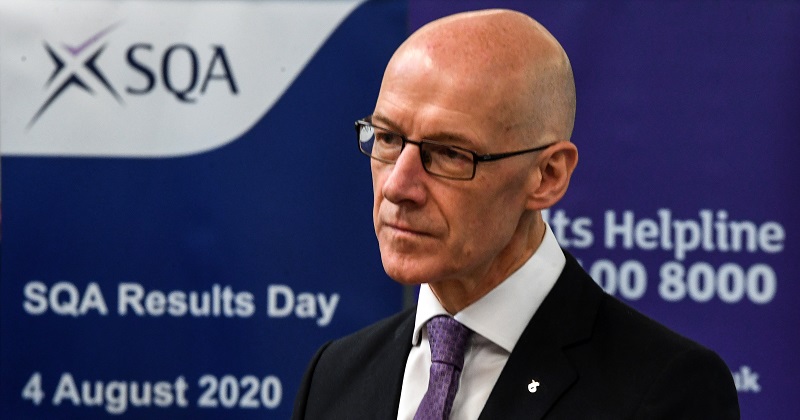 Scotland will withdraw around a quarter of standardised exam grades issued last week, in a move that raises questions for the UK government ahead of A-level and GCSE results days.

In a major climbdown, John Swinney, the Scottish education minister, today announced that more than 124,000 centre-assessment grades that were downgraded during the standardisation process will now revert to the original grades issued by schools.

Like England, Scotland cancelled all exams this year and replaced them with a system of school-provided grades, which were then standardised by the Scottish Qualifications Authority.

The system was supposed to make this year’s grades comparable with previous years, but there was a furious backlash when it was revealed last week that tens of thousands of grades had been hauled down by moderators, with poorer pupils disproportionately affected.

Today, Swinney admitted the Scottish government “did not get it right for all young people”, and apologised for the upset caused.

He went on to announce that he was directing the SQA to re-issue the awards that had been downgraded “based solely on teacher or lecturer judgement”.

The announcement has prompted widespread speculation about what will happen with England’s A-level results, due to be announced on Thursday.

The system used here was similar to that used in Scotland, and Ofqual, the exams regulator this side of the border has already announced that exam boards have had to haul down grades by up to 12 percentage points to ensure this year’s results are not “significantly undermined”.

“Students from these nations will be competing directly with Scottish students for HE admission to UK universities this year,” he said.

“We now have two qualification systems required for entry into UK universities, operating on completely different criteria with wildly different pass rates. This can only increase the worries that students in England have about the fairness of the grades they will receive on Thursday. It will also intensify the competition with English students for university places.”

In a response to media coverage of events in Scotland issued yesterday, Ofqual sought to reassure pupils “that the arrangements in place this summer are the fairest possible to enable them to move on to further study or employment as planned – with grades which are just as valuable as in any other year”.

“The grades students receive on Thursday will be based on the judgement of their school or college, and have been moderated by exam boards to make sure the same standard is applied for all students, whichever school, college or part of the country they come from,” the regulator said.

“Overall, grades will be slightly higher than in previous years, by around 2 percentage points at A level grade A and above.”

The UK Department for Education was approached for comment.