Teachers in schools rated ‘requires improvement’ and ‘inadequate’ have to report more frequently on pupil performance, according to new research.

A survey by Teacher Tapp for Education Datalab found that although almost all teachers are required to provide leaders with data on how pupils are progressing “at least every term”, the frequency of reporting varied depending on the rating of the school.

The use of data in schools has become an increasingly important issue for teachers and leaders in recent years amid claims the accountability system has produced a data-driven culture.

The Datalab research found that 63 per cent of primary teachers in schools in the bottom two Ofsted categories reported having to provide data on their class six or more times a year. For schools with higher inspection ratings, the figure was 51 per cent. 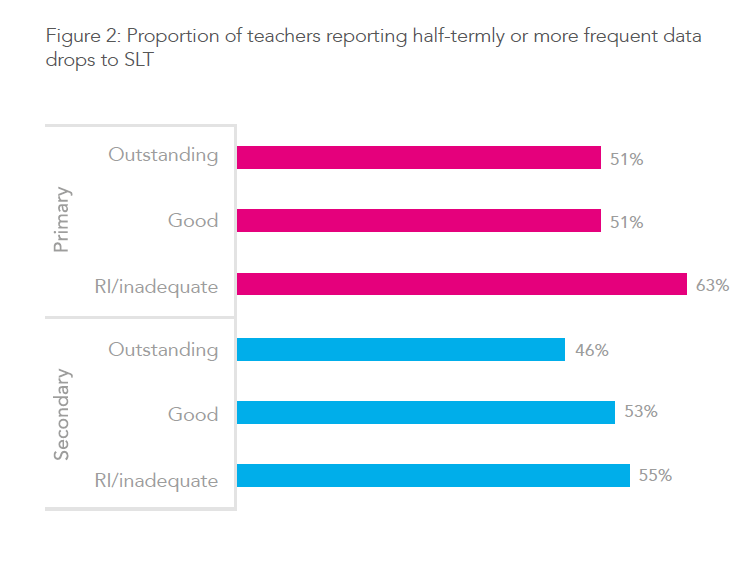 At secondary level, 55 per cent of schools in the bottom two Ofsted categories said they had to provide data every half-term or more frequently, compared to 46 per cent of teachers in ‘outstanding’ schools and 53 per cent in those rated ‘good’.

“It isn’t necessarily the case that data is being collected because Ofsted said they expected to see it – it might be that the management of these schools feel they need more data to measure the level of improvement taking place at the school.

“But it may also be because an outside body – inspectors, regional schools commissioners, a local authority or multi-academy trust head office – advised that more data should be collected or are perceived to favour frequent data collection.”

Data collection frequency also varies based on a school’s social profile. For example, 63 per cent of primary schools with the highest proportion of pupils eligible for free school meals requested half-termly or more frequent data, compared with just 39 per cent of those with the lowest proportion. 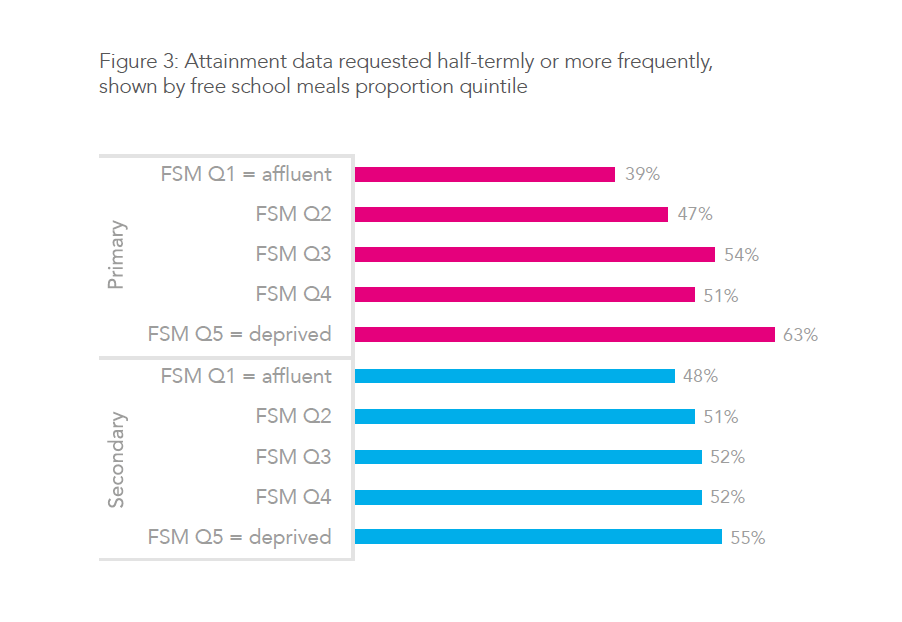 The research also found that more than one in five headteachers believe their schools should collect pupil performance data less frequently than they currently do.

The survey found 54 per cent of classroom teachers, 52 per cent of middle leaders, 41 per cent of senior leaders and 21 per cent of headteachers believe data collection “should be less frequent than is current practice”.

“This does suggest that some headteachers perceive some (real or imagined) outside pressures regarding data collection,” the research stated.

The Department for Education’s own workload advisory group recommended that that school leaders should not have more than two or three attainment data collection points a year. 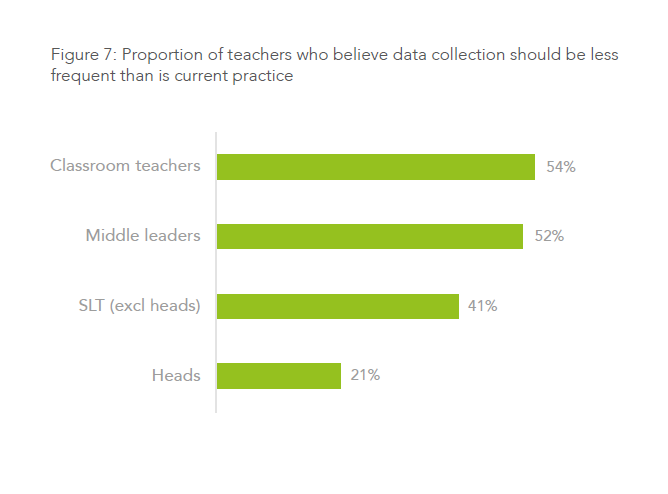 Stephen Rollett, curriculum and inspection specialist at the ASCL school leaders’ union, which sat on the advisory group, said the ambition was “still a work in progress”, adding: “The reality is that some schools continue to feel they need to collect data more regularly in the context of an accountability system which is overbearing and punitive.

“This is particularly likely to happen in schools rated by Ofsted as less than good where the pressures are especially acute. The findings of this survey show this very clearly and the fact that one in five headteachers would collect data less frequently in an ideal world suggests this is an issue being driven by external pressures.”

The research also raises questions about the accuracy of data submitted by teachers.

Among primary teachers, 7 per cent were quite sure the data didn’t accurately reflect attainment, while 10 per cent were concerned it didn’t.

James Bowen, director of policy at school leaders’ union NAHT, said the findings were “symptomatic of a high-stakes accountability culture where many schools, particularly those in challenging circumstances, find themselves under enormous pressure to demonstrate rapid progress”.

“Both local authorities and multi-academy trusts will more closely monitor schools with lower Ofsted ratings. Unfortunately, in the past, data has been the default method by which schools are expected to demonstrate such rapid improvement, even if that data was unreliable at telling the full story.”