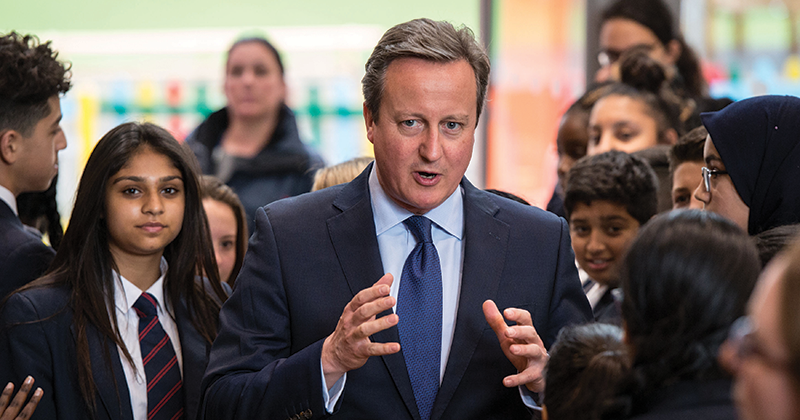 An extra-curricular project that schools were told they had to promote in assemblies is in financial disarray yet will still be given a budget of £420 million a year by 2020.

However, the plans to force schools to promote the National Citizen Service (NCS) for 16 and 17- year-olds have been abandoned.

Established in 2011, the NCS was a key part of the “big society” agenda of the former prime minister David Cameron, who now chairs the company. It uses government funding to pay private companies to provide residential trips, volunteering and work experiences to teenagers.

But the government has confirmed that plans announced in last year’s Queens Speech to force schools to promote it will no longer go ahead, and non-statutory guidance will be issued instead.

Originally the government said 360,000 young people a year would take part in the NCS by 2020, at which point the service would receive annual funding of £424 million.

However, the government spending watchdog, the National Audit Office (NAO), is concerned the target cannot be reached without forced promotion in schools.

NCS held events in about 3,500 schools last year, but just 55 per cent of young people surveyed last July were aware of its work and only 25 per cent expressed an interest in its activities.

Participation in the programme has risen from 8,434 pupils in its first year to almost 93,000 in 2016, but it has missed its own recruitment targets three years in a row and would need to more than triple the numbers in the next three years to meet the target.

Meanwhile, MPs and the NAO have raised concerns about the NCS’s readiness for expansion, given a “remarkably untransparent” set of accounts, plus the amount it pays sub-contractors to deliver the programme, but which fail to recruit young people.

According to the NAO, the NCS Trust paid an estimated £10 million for places not filled last year, and has only now commissioned an audit of its five providers to recover “some of the amounts paid”. It is not known how much was written off in previous years for unfilled places.

Michael Lynas, chief executive of the trust, admitted to MPs during a public accounts committee hearing on Monday that private providers kept 50 per cent of the funding, even when places were unfilled, as half their costs were paid upfront to cover things such as accommodation.

He also admitted the trust did not audit how much of its funding was spent on marketing, and that pro-bono support was not accounted-for.

Meg Hillier, the Labour MP who chairs the committee, said she recognised the “great aims” of the organisation, but said she was concerned that it was “not tightly financially managed”.

“That is a risk for your organisation because you are solely funded by the taxpayer.”

The government is currently passing laws through parliament that will give the organisation chartered status and more accountability to parliament, which will have to sign-off future accounts.

However, there is no planned law to promote the NCS’s work.