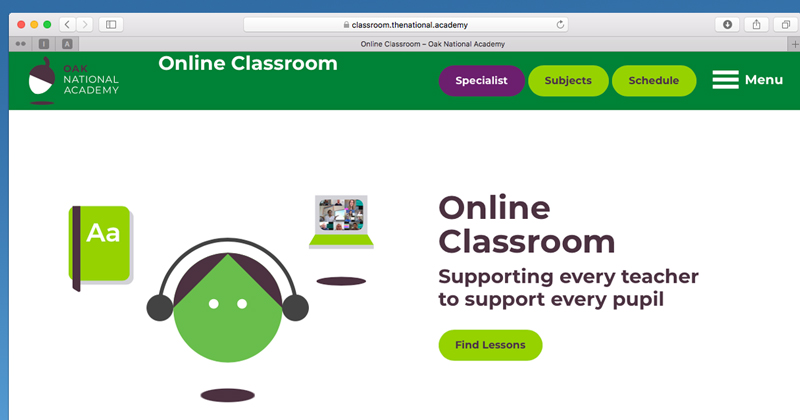 Schools will own the copyright of lessons produced for Oak National Academy under its £4.3 million government-funded expansion next year.

Schools Week revealed on Monday that the online classroom and resource hub would be funded as part of the Department for Education’s plan B should schools have to close again.

Creating 10,000 lessons, Oak will give schools “back-up” remote learning in case of local lockdowns or staff and pupil absences because of  illness or shielding.

The government has promised all pupils will be back in school full-time from September.

Matt Hood, Oak’s principal and a DfE adviser, said: “Given the risk of local lockdowns, it’s sensible to have a back-up plan available to any school, to make sure children can continue to receive an education.”

Oak will produce its own curriculum plan to cover the entire year so any school forced to close can quickly switch to remote learning by dipping in to the free online lessons.

The curriculum “map” will be available by the end of next month, with most lessons – covering from reception through to year 11 and a specialist programme – to go live before September.

Oak has set up advisory groups, including unions, sector leaders and Ofsted’s curriculum team, to establish what is the most common curriculum content. This will be put into “building blocks” that set out the order of lessons.

The national curriculum will be drawn upon for lessons across key stages 1 to 3, while exam boards will provide input for key stage 4. Schools will also be able to reorder topics and lessons to fit their own plans.

Hood said: “The less ‘friction’ there is between the ‘in-school’ curriculum and the ‘remote’ curriculum the better.”

Oak offers lessons in five primary areas, 13 secondary subjects and five specialist areas. Secondary subjects such as Latin and computer science are included, but others such as design
and technology are not – which has drawn criticism.

Hood tweeted the alternative was a tender process “over a number of months which would have been too late for September. It was a textbook now or never.”

The DfE has used these emergency powers before, noticeably to award a contract worth up to £234 million for Edenred to run its free school meals voucher scheme. However, the company did go through a tender process for a different contract under the Crown Commercial Service.

About 80 teachers have recorded lessons, with schools donating nearly £500,000 worth of staff time to fund this. However, this will be scaled up to more than 300 teachers over the next few months.

The cash will ensure schools are reimbursed or teachers paid if lessons are done during the summer holidays. Oak would not say how much the payments would be.

Overall, the Oak team will grow to about 500 in July – including teachers, resource support staff and the core team – before shrinking to a core of about 30 for the rest of the year. Oak’s partner schools will recruit the teachers.

The organisation has also confirmed that schools in the partnership will own the content of their lessons and are giving Oak permission to use them. It previously said there were no plans to charge for the content once the crisis was over.

Hood said the expansion would mean schools had “less to worry about, pupils’ teaching is less disrupted, and teachers’ workload is lightened, freeing them up to do what they do best – support their pupils”.

Many in education are concerned about public funding awarded outside the usual open tender process.

But commercial curriculum providers could be another sticking point.

As revealed by Schools Week, the British Educational Suppliers Association (BESA) has demanded the BBC remove its free lessons by summer. It is worried the lessons will squeeze out private curriculum providers.

In an email obtained by the Education Uncovered website, Caroline Wright, the association’s director general, told members it had a “number of concerns and issues” regarding Oak and the “potential for further state funding of curriculum programmes”.

BESA did not want to comment when contacted by Schools Week. The Publishers Association, which represents journal and electronic publishers in the United Kingdom, did not respond to a request for comment.