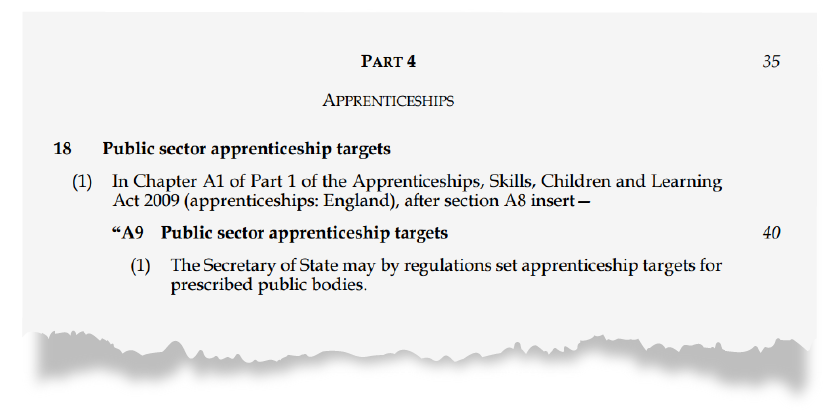 Large schools and multi-academy trusts will be forced to employ new apprentices every year after new rules passed into law last week.

The enterprise act paves the way for public sector apprenticeship targets, which are expected to require schools and trusts with 250 or more employees to employ a number of apprentices, equivalent to 2.3 per cent of their workforce.

The target, which was set out in a consultation document in January and must be ratified with further legislation, is based on apprenticeship starts. Schools will need to either hire new apprentices or move existing staff on to government-approved training programmes every year to be compliant.

Under the rules, a school with 250 employees must hire at least six apprentices each year, assuming its workforce remains at the same level.

An academy trust with 400 staff across its schools would have to hire nine every financial year, while Schools Week understands some larger trusts face having to hire up to 120 apprentices each year.

Apprenticeships, which must last for at least one year and combine on-the-job training with college courses, already exist in education, with schemes for teaching assistants, business administration and other support staff widely available across England.

Russell Hobby (pictured), general secretary of the National Association of Head Teachers, warned there would be “practical difficulties” for schools as many of their existing roles were for graduates.

“In a school of 300 staff, a 2.3 per cent target would mean that seven starters in any one year would need to be apprentices,” he said. “This may be unrealistic in the current climate, as budget constraints mean many schools are cutting non-teaching roles.”

Hobby said he wanted assurance from the government that the target was “not just a numbers game”, with “little thought given to the quality of the apprenticeships offered”.

The government has calculated that, of the 600,000 staff working in the schools sector, 110,000 work for schools, trusts or councils that employ more than 250 people. If correct, schools will need to hire 3,000 apprentices in total.

Although the 2.3 per cent target should not affect smaller schools, some will find themselves having to make up the numbers for an over-arching academy trust.

A recent survey of 14,500 Unison members in schools revealed just 17 per cent of respondents had apprentices in their schools. Of those, 50 per cent said the apprentices were teaching or classroom assistants, while 32 per cent worked in administration or finance.

Jon Richards, head of education at Unison, warned that the “rushed” nature of the targets could force schools to make quick decisions, risking “unintended consequences” for the workforce. “With increased pressure on finance and with increased expectations on school business managers, we would have huge concerns about job substitution.”

He said: “The future of apprenticeships in schools is up to degree level. They will be able to take any level of staff and train them through the apprenticeship programme.”

Questions about how schools will be affected by a proposed apprenticeship levy, in which businesses with a wage bill of more than £3 million a year pay 0.5 per cent of their payroll to government, also remain unanswered.

Currently, the government pays 100 per cent of the training costs for all apprentices in England. Under the levy, organisations paying into the scheme will be able to claim funding back to fund training, potentially recouping more than they pay in, depending on how many apprentices they hire.

But the government is yet to confirm whether smaller organisations will have to pay in to benefit from the funding.

Estimated number of apprenticeships (based on 2015 figures): 121

Academies Enterprise Trust (AET), the country’s largest academy trust, has spoken of the “financial burden” the levy will impose and is considering broadening the range of apprenticeships it currently offers so that it can meet the new target.

AET already works with the Skills Funding Agency to provide apprenticeship qualifications in areas such as business administration and teaching assistance.

A spokesperson for the trust said it will now need to look into expanding into areas such as physical education and estates management.

“The levy will also understandably place a financial burden on an organisation of our size and we are currently implementing a plan to respond to the government’s expectations.”