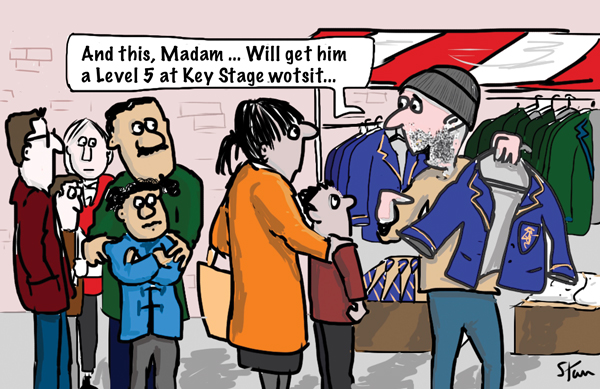 Schools need to work with families to “bring down uniform bills to an affordable level – not squeezing every penny”, says the UK’s biggest parenting site.

The warning from Netmums came as schools and uniform suppliers fight to block the sale of counterfeit uniforms.

Sports uniform supplier Falcon took action last month to stop a retailer selling fake versions of its clothes. Following the involvement of an intellectual property lawyer, the retailer gave up the counterfeit stock to Falcon. It paid damages and most of Falcon’s legal costs.

Hessle High School told Schools Week that counterfeiting of its school uniform was still happening locally. In 2013, businessman Masood Ashghar was convicted of counterfeiting offences after more than 1,000 items were seized from his store in Hull by Trading Standards.

Hessle High School and Penshurst Primary School had complained about the retailer using their school badges, which they had protected by copyright.

Despite DfE guidance in 2013 that schools should not recommend named suppliers, some schools continue to do so. Netmums founder Siobhan Freegard told Schools Week that some official school suppliers were “a rip off”.

One mother, who still has a teenager at secondary school, said she understood why some parents would turn to counterfeit goods: “While I would worry about the quality of the uniform, I can understand when people have not got the money and they have to go elsewhere, even if it was a dubious source.”

She added: “There are a lot of families out there struggling. My son’s uniform cost a few hundred pounds. Everything from the school including the PE kit had to have an emblem.”

Business manager, Mary Partington, at Brentwood School for Girls in west London said some shops in the area were trying to counterfeit its logo, “and we are trying to copyright that logo”. She said that the school had “worked hard to source good quality items” and had consulted widely with students to provide the uniform they wanted.

The school names one supplier on its website. Mrs Partington stressed that affordability was a key factor, and that students in receipt of a £60 uniform grant should be able to get the majority of the items they needed.

In 2012, The Office of Fair Trading surveyed the sale of school uniforms (see box). It found that three-quarters of state schools were placing restrictions on where uniforms could be bought. They found some suppliers charge up to two and half times the price of the same item from a supermarket.

Micon Metcalfe is the finance director at Dunraven School in Lambeth, south London. She said that no school should be making a profit on its school uniform. She added: “It is entirely possible to have a bespoke uniform and to keep prices low. Our blazer with a logo costs less than buying in a shop and buying a badge. We can also ensure that our suppliers have ethical procurement policies.”

Do you have a view on school uniform policies? Do you feel parents are being ripped off? Get involved in the discussion by contacting Ann.McGauran@schoolsweek.co.uk