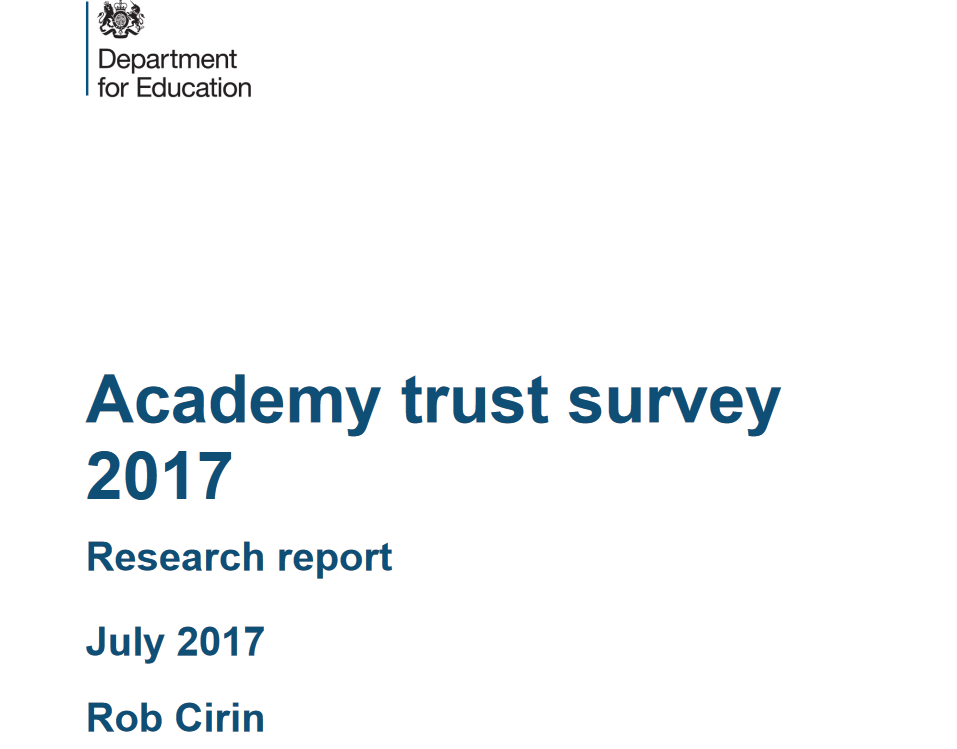 The government has today published its academy trust survey for 2017. It analyses responses from 326 multi-academy trusts and 543 single-academy trusts, covering issues from why they converted, what they think about financial regulation, and how much trusts charge academies.

1. Most schools converted into single-academy trusts for extra cash

The survey shows that 71 per cent of single-academy trusts converted to “obtain more funding for frontline education” – which was listed as the “main reason” for converting by 37 per cent of respondents.

Nearly eight in 10 also said they converted to use funding “as they see fit”.

The report says this is probably because SATs converted during the early stages of the coalition government, when greater funding incentives were available.

However the funding motive was more prevalent at secondary level. Primary single-academy trusts were more concerned about opportunities for collaboration and to seek efficiencies.

2. However schools joined MATs to collaborate and make savings

More than four in five schools that converted to become an academy as part of a multi-academy trust (MAT) said they did so to “create new opportunities and collaborate with other schools”.

Over two thirds of schools also said the ability to make increased efficiency savings under a MAT was also a driver.

3. A third of single-academy trusts won’t join a MAT for fear of losing autonomy

However the findings for SATs seem to jar somewhat with the above. Over a third of SATs said they had not joined a MAT because they want their school to maintain its autonomy.

Just under a third also said they fear their school would lose its individual identity. A quarter, however, said they are seeking to become part of a MAT.

The report found single academies reported being stopped from converting into MATs for reasons linked to their diocese.

For instance, one respondent said the diocese has halted its plans because it insisted any MAT with a voluntary-aided church school in it must be made up of more than half church trustees.

Another SAT said it feared its diocese could “restrict” its MAT options.

5. Few academies have taken advantage of freedoms to change their school day

The most common change reported across schools that converted was procuring services previously provided by the local authority (82 per cent), and making back office savings (77 per cent).

However the least likely changes were to specific school operations – such as changing term times, and the length of the school day.

But SATs were more likely to make those changes. For instance, 58 per cent of SATs reported they had changed their curriculum, compared with just 28 per cent of MATs.

MATs were more likely to make organisational changes – such as reconstituting the governing body.

6. MATs listed sacking school leaders on conversion as one of the most important changes

The study showed different priorities for schools converting into SATs and MATs.

7. Three quarters of MATs move senior leaders between their schools

The report found three quarters of MATs regularly move around teachers and senior leaders between their schools, with a third claiming to do so regularly.

One trust known to parachute its senior leaders into struggling schools is the Harris Federation, which runs schools in London.

8. The average top-slice trusts take from their academies is nearly 5%

Over half of MATs top-slice between four and five per cent of funding from their academies to fund their central operations (a previous Schools Week investigation on top-slicing can be read here).

This is below the estimated eight to 12 per cent that local authorities are said to top-slice from their schools’ budgets.

Two per cent of trusts are now top-slicing more than 8.6 per cent, the survey found.

Half of trusts also said they varied the amount they top sliced based on academies’ performance.

9. More trusts plan to move cash around their academies

As reported by Schools Week last week – more trusts are using the GAG pooling method to pool their academies’ cash, before moving it around schools as they deem fit.

The survey found while only 18 per cent of trusts currently redistribute funds between their academies, nearly a third plan to do so in the future.

10. Just 7% of academies in large trusts have full control over their teaching and learning

The majority of trusts said there is “some consistency” between academies in their approach to teaching and learning, but they are “encouraged to innovate”.

Meanwhile, seven per cent of the trusts with over 11 schools said they had a “single approach across all academies with a centrally prescribed set of materials for teaching and learning”.

11. One quarter of trusts think rules to ensure proper use of funds are “burdensome”

The majority of trusts felt the burdens placed on them to comply with various issues were “about right”.

However about a quarter of trusts feel that checks about financial planning, governance and financial oversight, as well as proper use of funds, were burdensome or overly burdensome.

A fifth said this was because of cost or the amount of time they took to comply with.

One trust said it accepted the importance of spending public money with careful due diligence, but said the amount of time the process took for the finance team and governing body was too much.

“As a future MAT, we will need to extend the finance teams capacity in order to deal with increased accountability and I am concerned on how onerous this might be,” its spokesperson said.

Another complained that trusts are governed by company law, charity law and rules surrounding schools: “We are far more heavily regulated than most other public institutions.”

12. One quarter of MATs have five or fewer trustees on their boards

While there is no agreed ideal size for a governing body or trust board, the average size in MATs was eight. Over half of trusts have between seven and 10 – thought to be good practice.