Schools are falling short of government-endorsed standards for good careers advice, despite a slight improvement in recent years, new research has found.

Of 578 schools asked to rate their performance against eight benchmarks for good careers provision, just 0.5 per cent managed to achieve all eight in 2016-17.

More than a fifth of schools did not meet any of the benchmarks at all, according to the Careers and Enterprise Company.

Although the benchmarks are not official accountability measures, they were set out in the Gatsby Foundation’s 2014 Good career guidance report, and received government backing at the time.

Former education secretary Nicky Morgan urged all schools to engage with the benchmarks and use them to rate their performance.

To meet all eight benchmarks, schools must have a “stable careers programme” which addresses the needs of each pupil and links curriculum learning to careers. They must also give pupils encounters with employers, employees, workplaces, further and higher education, and personal guidance, in order to fully comply with the measures.

In 2014, no school achieved more than five of the benchmarks. Now, however 2.8 per cent managed the feat.

The proportion of schools meeting half of the benchmarks has also increased, from six per cent in 2014 to 16 per cent last year.

Some benchmarks are harder to achieve than others. Just 4.2 per cent of schools met the requirement for a stable careers programme, while 45.9 per cent offered personal guidance to pupils. 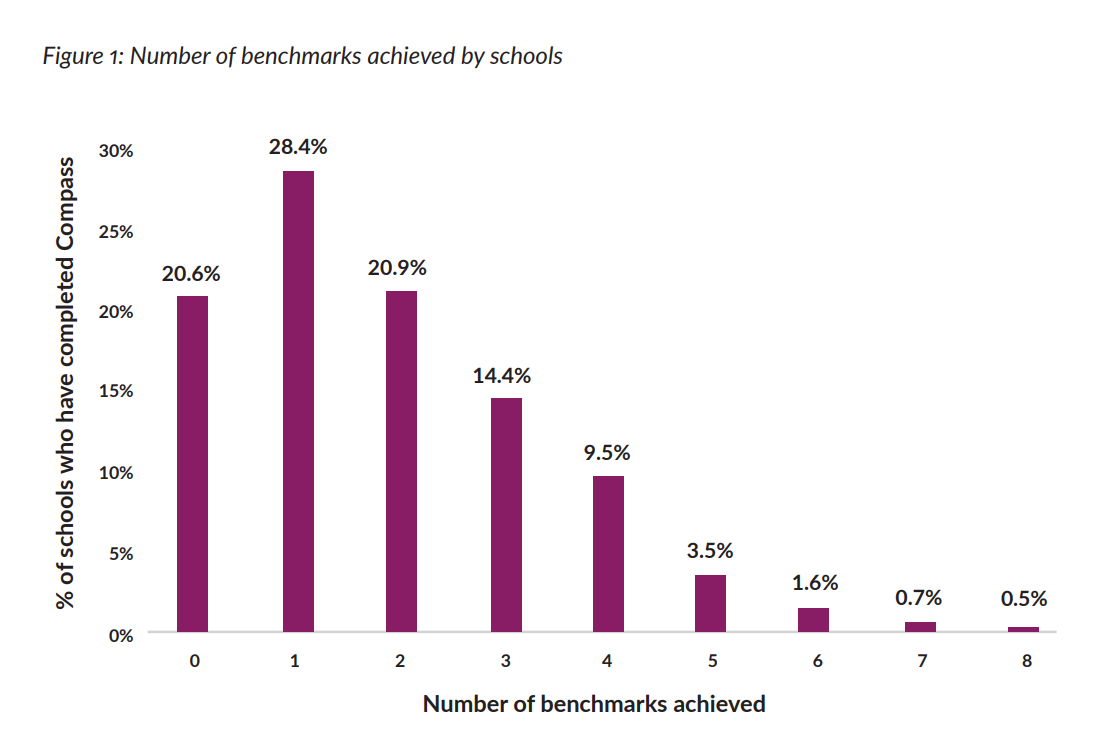 Professor John Holman, the author of the 2014 report who created the benchmarks, said he was “encouraged” by the results.

“The Gatsby benchmarks set world-class standards,” he said. “It’s not surprising that very few schools meet them all, but the 578 schools show improvement on the original sample.”

The CEC, which has now been operating for three years and controls a budget of more than £70 million, has also welcomed the findings.

Claudia Harris, the company’s chief executive, said the data collected through Compass – the tool that allows schools to rate their performance against the benchmarks – would provide a baseline for future analysis.

“Although the research confirms a challenging baseline, we see improvements from 2014 and most importantly the report lays out a path to success based on those schools that are performing well against the benchmarks,” she said.

“We will repeat this publication on an annual basis. We believe this national project will help improve careers support in England, ensuring that young people have flourishing futures and strengthening our economy.”

Others are less positive about the report.

“The research shows both the energy with which some schools have addressed issues of careers provision, and the extent of the problems they face.

“The solution doesn’t lie in yet more effort on the part of an overburdened teaching force. Careers preparation is a system problem that requires a strong, properly funded, nationwide response.”