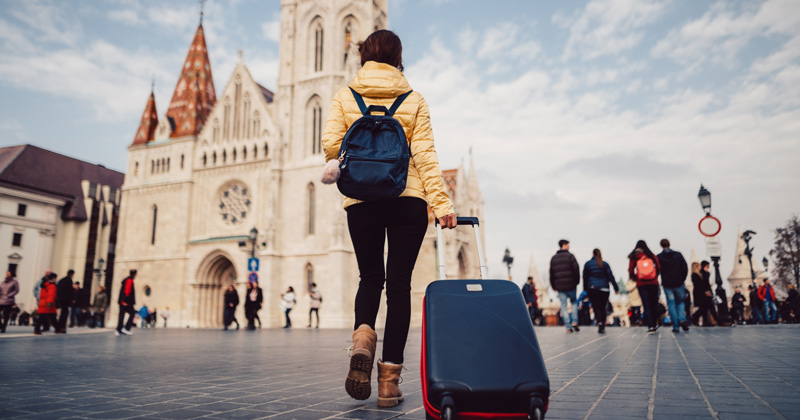 Ministers say up to 35,000 students will be able to take part in international placements, however the majority of these would be at college and university.

Ecorys, which is co-delivering the scheme has said only £10 million had been set aside for schools, a 69 per cent decline on last year’s Erasmus+ funding. Funds for staff training have been scrapped altogether.

Kevin Gilmartin, a post-16 and colleges specialist at the Association of School and College Leaders, said the Turing scheme should be a “great opportunity,” but warned: “If it transpires funding has been cut, it will be a real blow to the future life chances of our young people.”

When pressed for further information on the school funding figures this week, Ecorys seemed to backtrack saying the budget was actually “indicative” rather than ring-fenced, sparking confusion.

The Department for Education did not respond to requests for comment.

Criticism of ‘unclear’ allocations under Turing

Paul Harrison, an external evaluator for Erasmus+, criticised the “unclear” allocations. “They’ve just produced guidance, and still we’re having to ask questions. If it’s not ringfenced it’ll all go into higher education – schools will be the biggest losers.”

2020 funding also included £4.7 million for staff training, which is no longer available as the Turing scheme focuses on student opportunities.

Fewer pupils may be able to going abroad. The data shows more than 6,000 school students went on trips in 2018, the most recent year available. Only around 5,000 school pupil participants are expected under Turing.

The school takes up to 28 pupils a year to a Spanish village for a week. “They attend schools every day and have this incredible experience.”

Tola Rego said the Turing scheme’s £53-a-day pot for living costs may not go far enough in cities like Madrid. “Under Erasmus+ you said how much you’d pay for food, accommodation et cetera, and they’d take it into account.”

Funding also does not cover overseas schools visiting the UK, sparking concerns about a scarcity of host schools. “If you’re a French school, you’re not going to come here if you’ve got to find the money when you could get funded to go to Germany,” said Harrison.

The biggest frustration for many schools will be that programmes aimed at staff development or school improvement are no longer eligible, with Turing grants only covering staff to accompany pupils.

Parkwood staff, from the head to language teachers to cooks, have shadowed counterparts in Spanish schools, and teachers attended university crash courses on incorporating Spanish learning across the school. Art classes are now in Spanish, and school meals include Spanish cuisine.

It helped the school secure ‘international Spanish school’ status from the Spanish government. “When we came back people were full of ideas,” she said. “There’s lots that wouldn’t happen if teachers weren’t involved in exchanges.”

“There’s a sense it’s a jolly, but they’re going to places recognised as innovative. Our country clearly doesn’t know it all,” said Chris Andrew, the head of St James the Great primary school in Thornton Heath, south London.

His school embraced outdoor learning after staff saw how it was done in Sweden. “Here forest schools are seen as brave, but there it’s normal. We’re an inner-city school, but you can still manage it.”

Other staff learnt from Icelandic schools how to better involve parents in special needs support, while an Italian trip helped the school focus more on children working things out independently. “When they make a mess you sometimes see adults take over. It’s about stepping back.”

“You’re going to get just a third of the children having those opportunities as before.”

Harrison warned foreign languages teaching in primary schools would take a particular hit. “There’s huge need – an awful lot of teachers dropped languages at 14; with Erasmus+ you could do an intensive language and teaching course abroad.

“But it’s far from just languages. The whole lot’s gone under Turing. I’m not sure schools have fully appreciated the impact yet.”

Schools have also lost access to the Erasmus+ eTwinning platform, which allowed them to share learning resources and join projects with European partners.

Meanwhile there are concerns the May 7 deadline for applications leaves little time to devise plans, find partners and complete an unfamiliar application process.

But the government argues the Turing scheme offers new opportunities, focusing on global rather than largely European trips. It also says it will better target disadvantaged students.

“We believe schools will also appreciate the extra funding for disadvantaged students as these are often the pupils least likely to take part in a period abroad.”

She said many schools already had international partnerships that could lead to Turing-funded trips, and those without could use the British Council’s online partner-finding tool.