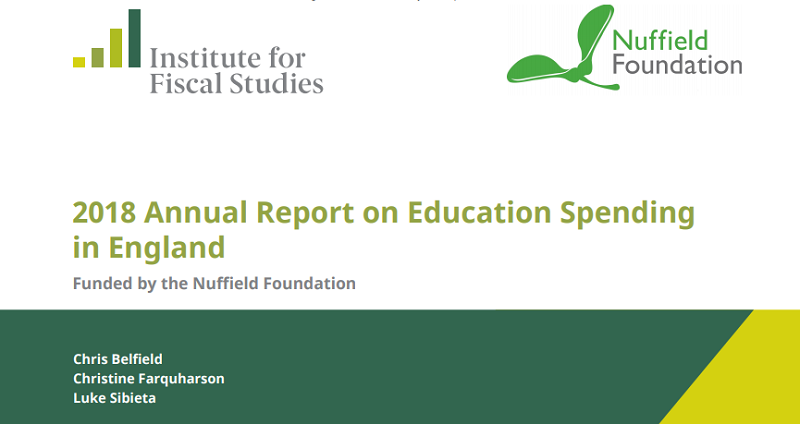 Funding for students in school sixth forms has plunged by 21 per cent since 2010–11, new research has found.

Government funding for 16 to 18 year olds has been cut “much more sharply” than funding for pupils in pre-school, primary, secondary or higher education, according to the ‘2018 Annual Report on Education Spending in England’ issued by the Institute for Fiscal Studies today.

Spending per pupil in school sixth forms is also now significantly lower than for students of the same age in further education (FE) colleges.

This marks a “dramatic reversal” according to the research, as spending per student in school sixth forms was about £600 higher than in FE in the mid-2000s.

According to the research this change is “a direct result of policymakers’ efforts to ensure greater parity in funding”, due to concerns that sixth forms were funded more generously.

Geoff Barton, general secretary of the Association of School and College Leaders, warned that the current “extremely low level of funding for 16 to 18-year-olds” is leading to courses and student support services being cut.

The government must invest to protect our children’s education

“It is a crucial phase of education in which young people take qualifications which are vital to their life chances and they deserve better from a government which constantly talks about social mobility,” he said.

According to the researchers, the average level of spending per pupil in primary and secondary schools rose by around five per cent per year during the 2000s and was then largely protected in real terms under the coalition government.

Overall, total school spending per pupil has fallen by eight per cent since 2009–10, including a 55 per cent real-terms cut in local authority service spending and the 20 per cent cut to school sixth-form spending per student.

The research also showed that while schools’ costs increased more slowly than inflation between 2010–11 and 2015–16, they grew faster than inflation afterwards.

“It shows that funding is lower than it was in 2009-10 in all types of school. The government must invest to protect our children’s education.”

A Department for Education spokesperson said: “Whilst we accept that there are pressures across the system we have protected base rate funding for 16 to 19 year olds until 2020, and are putting more money into our schools than ever before.”