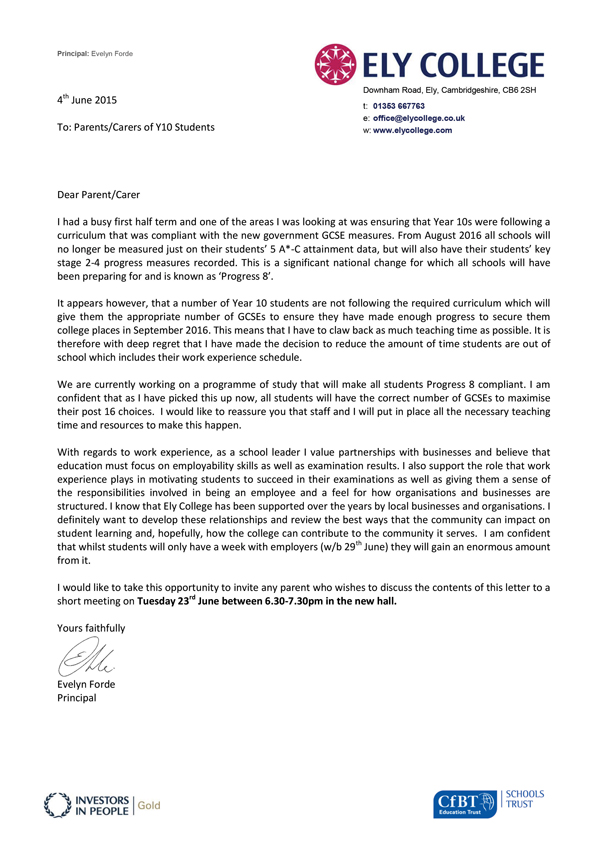 A Cambridgeshire school has cancelled a week’s work experience and is making year 10 pupils take on additional GCSEs half-way through their courses to make sure they are “Progress 8 compliant”, Schools Week can reveal.

Ely College principal Evelyn Forde wrote to parents of the cohort at the beginning of June to tell them pupils were not currently following the “required curriculum” to ensure they have “made enough progress” to secure college places in September 2016.

She said pupils would not be undertaking as much work experience as initially planned and that the school would work on creating a “programme of study that will make all students Progress 8 compliant”.

From next year, secondary school performance will be judged based on pupils’ progress across eight qualifications – including five English baccalaureate (EBacc) subjects, plus three further subjects (although a number of vocational subjects do not count).

A score will be given for each pupil’s progress between the end of primary school and the end of year 11. A school will be judged based on the mean average of all of its pupils’ individual scores.

In the letter to parents, Ms Forde said the school would be measured by Progress 8 from next summer but that pupils also would need to “have made enough progress to secure them college places in September 2016”.

At present, colleges ask for a certain number of grades and there is no government expectation or requirement that admissions will start to be based on progress scores.

Cambridgeshire county councillor Peter Downes, a Liberal Democrat and former headteacher, is concerned about the impact of pupils unexpectedly taking on additional courses.

“Are they, for example, going to ask children to pick up a language in year 11, which they may not have studied since year 9? As a former French teacher, I know how much of a difficult job it will be to fill that gap.”

He said that politicians were misusing the exam system to highlight weaknesses in schools.

“There is far too much pressure on schools to ‘game’ the system to appear to be doing well.”

Ms Forde took on the headship of the Cambridgeshire school, which is sponsored by academy chain CfBT, in March after the former principal, two vice-principals and its governing body resigned following a damning Ofsted inspection.

The school was put into special measures, down from a good rating.

In last year’s GCSEs, only 39 per cent of pupils achieved five or more A*-C GCSEs, including English and maths. This is below the government’s minimum “floor” target.

When asked about the reasons behind the sudden changes, a statement from the school said: “The technical guidance on Progress 8 is relatively new, and many schools are grappling with the implications for their students.

“As a new leadership team, we have acted quickly to rigorously review Ely’s curriculum . . . to ensure we are setting high standards for the school to meet all our students’ educational needs.

“In light of this review, we have increased the choices available to our students; especially those who have a desire for more challenge, to put them in the best possible position to access higher level courses post-16. Curriculum time will be provided to facilitate the delivery of any additional courses.”

The school did not respond to questions about the planned changes: including what courses students would now need to take, or which colleges in the local area required students to show a certain level of progress.

But it is not alone in believing that colleges could ask for progress scores as part of their admissions criteria. Schools Week has seen a presentation given in a school by a local authority careers adviser that states colleges will be admitting pupils based on their Attainment 8 or Progress 8 score.

The headteacher of the school in which the assembly took place said: “I think this is a misunderstanding as to what the scores are there for. No cohort has yet gone through the Attainment 8 or Progress 8 scores, and there seems to be confusion between sixth forms, colleges, and careers advisers, and what they are telling pupils.

“To me, it looks like this school [Ely] is using the stick of getting pupils into sixth form as a backdoor warning so it can change its curriculum to look better in Progress 8 scores.”

A DfE spokesperson said: “Schools are free to teach qualifications that do not count in Progress 8 as long as they are age-appropriate and we expect them to make that decision based on the best interests of the pupil.