The number of secondary schools falling below the government’s “floor standard” fell last year, but only after the results of some schools were excluded from the data.

However, the government claims the figures are not comparable, because UTCs, FE colleges with 14 to 16 provision and studio schools were not included in the data in 2018.

New data also reveals that the gap in attainment between disadvantaged pupils and their better-off peers at secondary school grew by 0.6 per cent between 2017 and 2018. This is in contrast to the disadvantage gap at primary level, which narrowed by 3 per cent last year. 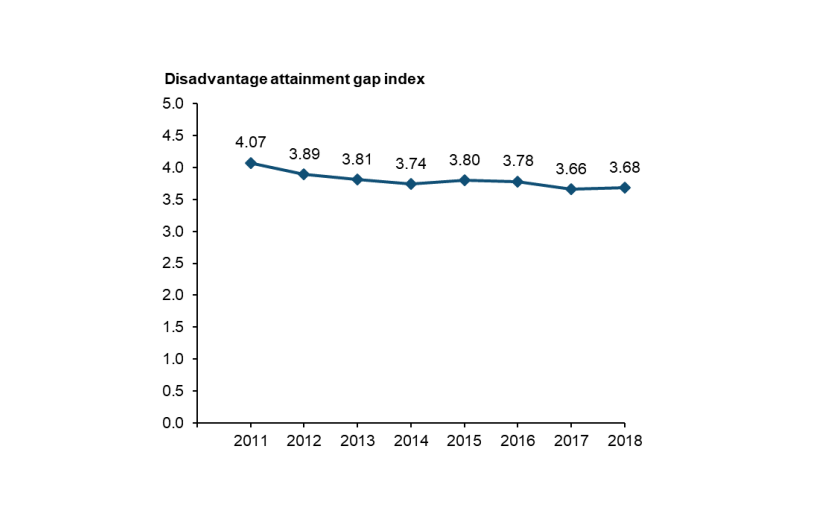 Andy Ratcliffe, CEO of Impetus-PEF, a charity focused on helping young people from disadvantaged backgrounds, said the figures show that disadvantaged young people “continue to be significantly less likely to achieve crucial GCSEs in English and maths than their better off peers”.

“The gap between the two has in fact widened this year,” he said. “English and maths are essential for young people to progress to the next stage in education or into work, and we know that young people who don’t achieve the grades by 16 are unlikely to catch up.”

Geoff Barton, the general secretary of the ASCL school leaders’ union, has urged parents and governors not to “place too much weight” on performance tables, which “can never tell the full story of a school”.

“The secondary school performance tables are inherently flawed in that the headline measure of progress 8 which is used to judge the performance of schools effectively penalises schools which have a high proportion of disadvantaged children,” he said.

“The effect of this is to stigmatise these schools, making it more difficult to recruit headteachers and teachers and demoralising pupils, parents and communities.

“Current performance tables are long past their sell-by date. We urgently need fairer performance measures which better recognise the achievements of schools that teach the most vulnerable pupils.”

What is the floor standard and coasting definition?

In 2018, a secondary school would have fallen below the floor standard if its progress 8 score was below -0.5 and the upper band of the 95 per cent confidence interval was below zero.