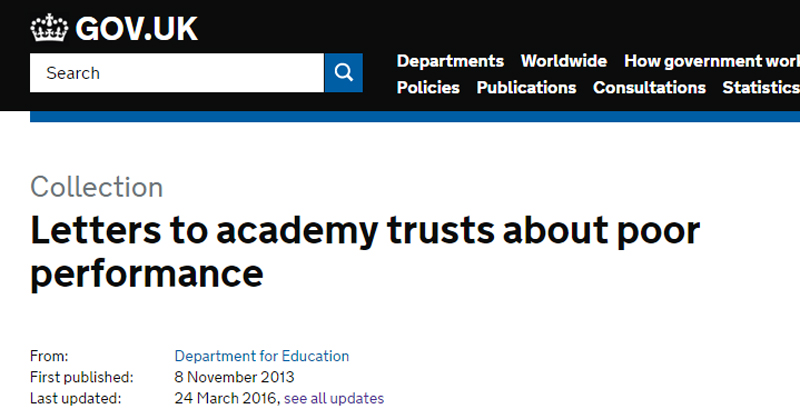 The government has been accused of trying to avoid bad publicity by delaying the release of documents relating to poor pupil performance and governance at 15 academies.

On Thursday, March 24 at 5.37pm, one day before the bank holiday weekend, the government released 13 pre-termination warning notices that had been issued between mid-January and February 18.

The notices, which warn sponsors of a potential termination of their funding agreement if standards are not improved, are usually published two or three at a time at fairly regular intervals.

But publication in larger batches is becoming more common. Six were published on November 16 last year, while a further seven were released on March 4.

The government has already faced criticism for releasing key documents, often in large numbers, before parliamentary recess periods or at the end of a working week.

Hundreds of documents were released on December 17, including several warning notices to academy trusts and councils, and plans to cut the annual £2,300 grant to help small infant schools fund free meals for their pupils were announced with a minor webpage update at 4.25pm on Friday, January 29.

A spokesperson told Schools Week the notices were published “as regularly as possible, once the trusts have had a chance to review them”.

But Janet Downs, an activist with the Local Schools Network, accused the Department for Education of trying to avoid bad publicity about academies by pushing the release back until after the release of its white paper on March 17.

“There’s a precedent for delaying letters that could result in adverse publicity about academies. A cynic might say the government delayed these adverse comments.”

Six of the 13 notices were issued to Northamptonshire schools under the control of the Education Fellowship Trust.

Ofsted criticised the trust last summer for “poor financial management” and an investigation by the Education Funding Agency, published in 2014, highlighted concerns over governors’ expenses, a fact-finding trip to New York and unadvertised jobs that went to family members. A financial notice to improve was lifted in April last year.

Poor governance rather than educational underperformance prompted intervention at Dundry Church of England primary academy and the Academy of Trinity in Radstock, Somerset. Their sponsor, the Dove Family Academy Trust, was told by then regional commissioner Sir David Carter, now national schools commissioner, to transfer both schools to a larger trust.

Letters were sent to the Nottingham Roman Catholic Diocesan Education Service and Creative Education Academies Trust about the Holy Family Catholic academy. Cleethorpes, and Weavers academy, Wellingborough. Both schools had a 32 per cent pass rate for five A* to C GCSEs, including English and maths.